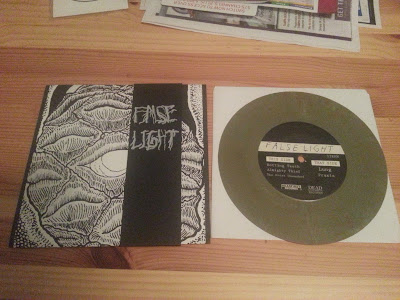 It's been nearly a year since False Light's self-titled EP was released digitally by the always intriguing Grindcore Karaoke, but only recently has this album been released on vinyl thanks to Headfirst Records and Dead Chemists Records. The album itself is grayish-green with spots of brown, like a murky bog shrouded in mist, a description that likewise applies to their punishing brand of grindcore/powerviolence. 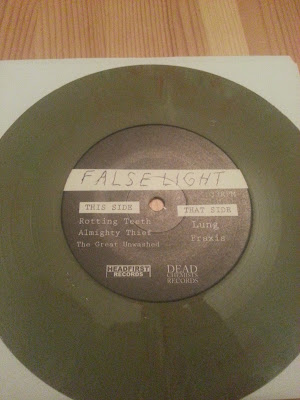 False Light initiate their sonic assault with "Rotting Teeth," and what an opener it is! Recorded and mixed by Cory Fallows and mastered by Brad Boatright, the overall production of this record truly complements the bleak and abhorrent nature of False Light’s music; admittedly, however, I know next to nothing regarding producing music but this opening track feels and sounds lo-fi albeit well-balanced. At times the guitar and bass meld into this monstrous tone anchored by blast- and d-beats, the kind of sound to which I can’t help but bust out my Grim Face. Yea, shit just got real, and gets even more so during the last twenty-or-so seconds when the band slows down the tempo and just levels the listener. What I especially enjoy about this song is how it sets the stage for the looming onslaught that follows. “Almighty Thief” is 0:37 seconds of grindy goodness and is likely better reviewed with a simple picture of someone being punched in the face. “Feed, feed. Blacken the air you breathe” is repeated like an anti-mantra in "The Great Unwashed," meant not to comfort but to instill hostility. A feedback-drenched beginning gives way to an unremitting blast-beat assault that yields only to the aforementioned lyric being repeated over menacing, sludgy riffs, just before closing the song with the initial ferocity of the first sixty seconds. Yes, that sentence is quite the mouthful.


Kicking off “That Side” of the record is “Lung”, a song that conveys vulnerability amidst the disillusion and resentment yet retains the viciousness of the previous tracks. It’s more manic than its predecessors, in my opinion, as it careens between mid-tempo crunch to an all-out powerviolence attack before closing with a grim dirge. I particularly like how the last lines of the song—“diseased, directionless”—mirror the way in which they are sung by the band’s vocalist, Patrick. There is a genuine feeling of despair and exhausted anger in his voice that resonated with me as I read the lyrics along with the song.The final track on the record, “Praxis”, is another shining example of the fast-slow fury of False Light. It goes for the throat until your eyes glaze over. Needless to say, I’m very much excited to hear what comes next from this South Carolina quintet and hope to catch them live so that I may experience their ugliness (in a good way) first-hand.

-Review contributed by Julio Espin.
Posted by Black Metal and Brews at 6:59 PM No comments: 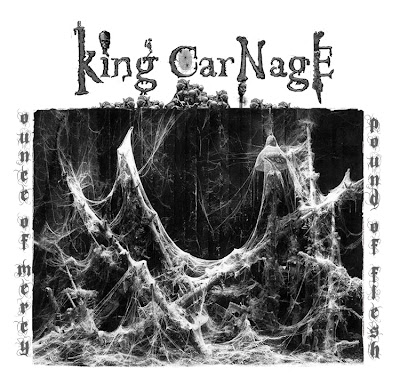 King Carnage- Ounce of Mercy, Pound of Flesh CD (Badgod Music)
Today I'm in a bit of a mood for some absolutely hideous death metal, and there are few better releases I've been checking out for review than King Carnage. This album, like pretty much every Badgod release, is downright filthy. Do you want to be strung up and tortured by your death metal? This is the album for you. The guitars are tuned so low they carve the very earth beneath them. The drumming is tight enough to be clearly well played but loose enough to add to the overall murky atmosphere. The vocals are in that lower realm between a primitive grunt and an ominous whisper often inhabited by bands like Beherit. Grab this album from the label's bandcamp (link above) while you still have the opportunity. It comes with a sticker and a poster in a limited edition of 250. 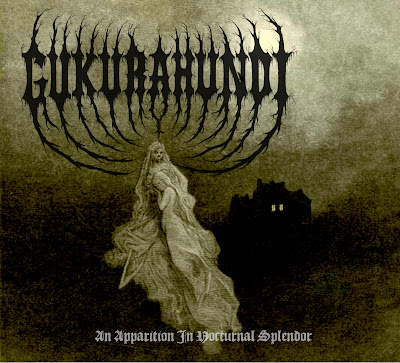 Gukurahundi- An Apparition in Nocturnal Splendor CD (Manicidic)
These guys sent me an email a couple of months back and I was so preoccupied with my studies that I didn't even shoot them a response back. Big mistake on my part (and kinda inconsiderate, sorry dudes). This album is noticeably cleaner than the aforementioned King Carnage CD, but it's no less punishing in its own way. Blistering melodic riffs circle around insanely paced drums while the vocalist throws seems to fill just about every space not occupied by the other instruments. The band does have enough empty space and change of pace to keep things fresh, so this isn't so much a criticism as it is an observation. Solos aren't as common as a general driving assault, but these guys definitely take the time to show off their chops and the vocalist is more than competent enough. The occasional groove-based breakdown may steer away some purists but I still recommend a listen. This album is currently available in an edition of 100 digipak CDs. 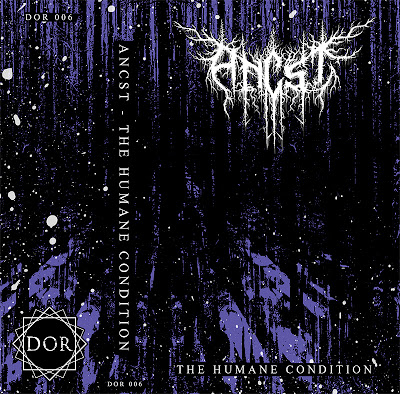 Ancst- The Humane Condition CS (Dark Omen Records)
This album's a brief two song cassette, but they make every second count. With two tracks averaging six minutes each, Ancst has created one of those tapes that just begs to be flipped and replayed countless times (each side has the same program, conveniently enough). Ancst's brand of black metalisn't necessarily reinventing a genre, but it's one of the most memorable and compelling things I've heard in this niche in quite some time. The band can switch from grind-influenced black metal that tears the ears like shrapnel to glacial sludge in a heartbeat, and it feels completely natural. There are even a few moments of pure bliss just to showcase the band's diversity and clear musicianship, which is what makes this band stand out from the pack. While fans of groups like BM&B favorites Terzij de Horde will enjoy this, there's also a good chance that fans of the more nebulous and ugly side of black metal will also dig Ancst's urgent fury. This tape was available in 100 copies, with the first 15 on an orange tape with patch while the remaining 85 are on purple tapes without a patch, but the orange is already sold out. Grab a purple copy while they last.
Posted by Black Metal and Brews at 3:52 PM No comments: 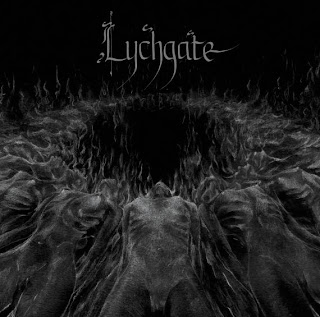 So this album has been announced for a while now, yet I haven't had my review posted. Usually I'm pretty prompt with reviews, but usually albums aren't quite this overwhelming and massive. Lychgate's debut album is not something to be taken lightly. It's not uncommon for established musicians to start a new band which is all hype and minimal delivery. Lychgate does anything but that. To be honest, this album was able to sneak up on me in every sense and I'm delighted that it sounds even better than I'd hoped it would. Being the brainchild of members of Lunar Aurora, Esoteric, and Omega Centauri, one would expect something pretty chaotic and enjoyable, and indeed that is exactly what Lychgate has concocted. 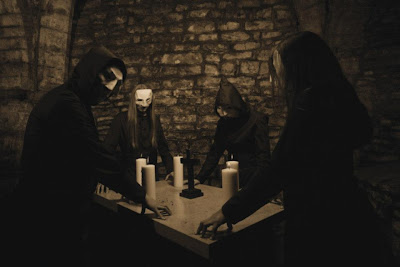 The album opens with an appropriate hybrid of marches, and I'm unsure whether I'm witnessing a funeral or the initial onset of war, but I know that I'm in for something immense. What Lychgate follows up with is a bit of both. Perhaps it's the destruction of foes and the subsequent lamentation all at once, but this unique take on the black metal sound and style is just as much rooted in funeral doom as it is in classic black metal stylings. I hate referencing other bands, but I hear echoes of the grand orchestral fury of Septic Flesh and the majestic chaos of mid-period Arcturus in here alongside certain hints of Opethian melody and song structures. Lychgate spends so much time contorting around itself that I often find myself double checking to see if I'm listening to the same album, yet things are mostly cohesive and fluid. While it can be slightly disorienting as a listener, I feel like it's more of an attempt to fit many great ideas into one album that can only hold so much rather than any sort of identity crisis. If anything, Lychgate makes such a strong statement of intent on this album that I feel it should have been longer. That said, if the album's only true weakness is that its length betrays its sheer immensity, then perhaps future releases will allow Lychgate to expand within the appropriate space. I really feel like these guys are going to be a stellar live band, as every piece of the puzzle is already in place. I seriously hope this happens.

If you haven't already learned about this album from about a dozen other stellar metal blogs, now's your chance to head over to the Gilead Media website and place an order for your copy of this excellent debut. Share this slab of spiraling black madness with your friends and maybe we can garner enough interest for a US tour. Let's hope.
Posted by Black Metal and Brews at 4:48 PM No comments: