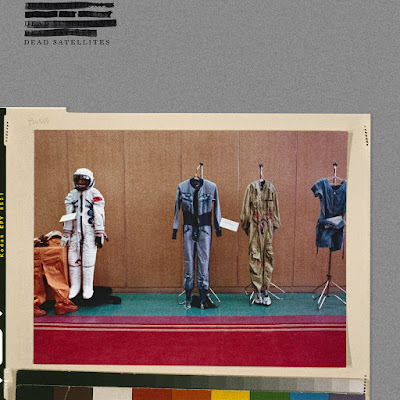 Brooklyn duo Dead Satellites have been offering up some of the most uniquely charged heavy music in the region since their formation last year. As two-thirds of psychedelic doomsters Matte Black, drummer Fidel Vazquez and guitarist/singer Matthew McAlpin already had a natural order for working together and seem to have distilled it to a raw, spontaneous form. Their debut EP, Burst (named after the recording engineer Charles Burst), comes out next Friday, July 26th, and these four songs are stripped bare in concept, yet they remain complex and full, with no ideas left unexplored and each riff and rhythm celebrated accordingly.


Over the few Dead Satellites gigs I've had the privilege of attending, the band has displayed a commitment to maintaining an almost restless sense of variation within a set that remains cohesive. This exploratory yet consistent on the four songs on Burst, each of which is distinctive without feeling forced or like a needless departure. From the get-go, opener "42" pairs a very direct riff with a drum-beat that is oddly bouncy, creating a hypnotic effect that shows the band's aptitude for taking something seemingly familiar and making it new through their own lens. Following this is (essentially) the centerpiece of the EP, clocking just under ten minutes in length, "Beyond the Sun/Last Transmission." In the song's first section, vocals seem to stretch endlessly over a blistering boogie as they echo towards an unreachable horizon. This would be good enough on its own, but the sudden lurch towards a punishing sludge that crawls into oblivion as the song peters out under its own weight is an unexpected and rewarding change. Following this are two high-energy, punky songs that almost remind of the mid-'90s AmRep sound, pairing noise rock energy with oddly hummable vocal melodies. "Name_" burns through two minutes in the blink of an eye and feels like an instant hit to these ears, while closer "El Guapo" shows the band ending on the most urgent note they can, with some of the album's most intricate drumming on full display. The sense of tension displayed on this album may have clear roots in the past, but the band's eye to the future is apparent in the raw energy.

To celebrate the release of Burst and to urge readers to join up for Dead Satellites' upcoming show to coincide with the EP's release, here is footage of the pair covering "School" by Nirvana from a recent gig in March of 2019. Watch the video below, pre-order the Burst EP, and catch Dead Satellites' next show on Sunday, July 28th at the Footlight in Brooklyn, with support from Ruby Dear, Lacey Spacecake, and Savage Youth.

[full disclosure: Lacey Spacecake (in which I play bass as a live member) is performing as part of Dead Satellites' next show. This fact has had no impact on the review itself. If I were not a fan of the music, I would not support it in this fashion.]
Posted by Black Metal and Brews at 1:45 PM No comments: