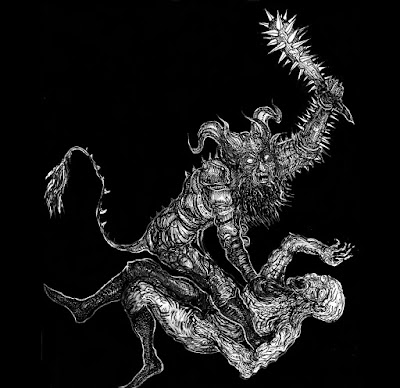 It's easy to lump bands into categories, or to assume that a band's sound can be easily predicted by a genre tag or two. In some instances, a band plays well into a particular scene and it's all good and fine. When examining the explosive and expansive blackened punk of Montreal-based Oppression, there's simply too much going on to classify in a brief term. While the increasingly online audience for black metal cassettes is more invested in easily hashtagged or aesthetically pleasing cult demos than bands doing something challenging, there should still be a sizable audience for a band who manages to captivate both the raw black metal fan in me and the side of me that was raised on the darker sounds of the 1980s.

After a potent split with New York-based black metal group Sanguine Eagle, Oppression gained serious traction in underground communities, with many looking forward to a release to follow. Now that they've had a chance to deliver upon their promise in full, it's clear that any attention garnered has been well earned. While some tracks deliver a more familiar black metal angle, like the opening title track, which literally kicks things off with a Celtic Frost-inspired "ough" before launching into a tortured sounding stompy sort of black punk, the band has more up its sleeve than just this approach (although even this alone would be good enough). On songs like "Les champs rouges" and "Moskovskaya" there's an anthemic quality in both the riffs and the singing that lends a mournful but catchy post-punk quality to the sound without breaking away or sounding forced. While many bands would be content to simply go for the throat with howling mid-paced bangers throughout, the varied approach works well and makes almost every song a standout in its own fashion.

Those seeking digital copies of this can easily download it from the group's bandcamp page (linked above in the player), while those seeking the physical experience can order cassettes directly from the label at productionshaineuses@gmail.com. This album has been a constant play over here for the duration of 2019, which is a strong endorsement considering how great this year has been for black metal. In fact, this review was initially begun in February and again in April before I finally got it together enough to ground myself and admit that it's better to just get it out than to try to write the "perfect" review for an album I love so dearly. I hope you'll all love it as much as I do.
Posted by Black Metal and Brews at 1:37 PM No comments: