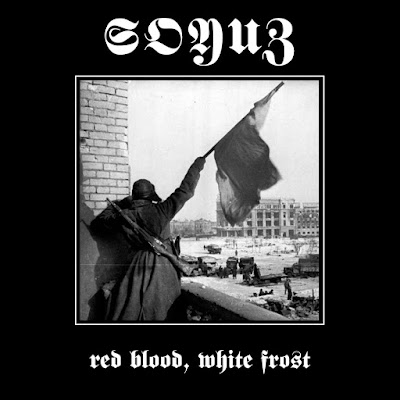 It's unprofessional to write reviews with "I" as the subject, but I'm a blogger and professionalism isn't my strong suit. There's your disclaimer, here's your review. I've been a black metal fan for nearly twenty years. For much of that time, I've had to deal with the disappointment of knowing that right-wing politics of a pointed, hateful nature are often associated with this genre. NSBM and childish edgy behavior aren't a dominant force, sure, but everybody's aware of their existence. To my surprise and relief, the last few years have led to an uptick in political black metal from the leftist end of the spectrum. Red and anarchist black metal have always been a thing, but it's often been kept off to the side and not really highlighted. With this recent surge of left-wing black metal, however, I've been mostly disappointed. I get that unity is important, but I can't pretend to enjoy bands when their politics seem more rooted in gimmicks than action or when their ideas are aligned with mine but the music just doesn't really hit home. Thankfully, there are gems that hit all the marks, like new Dutch black metal act Soyuz.


Soyuz announced its existence on May Day (appropriately enough) with the release of Red Blood, White Frost, an album of mostly mid-paced atmospheric black metal that pays tribute to the Red Army in its fight against Nazi invaders. I'm no political scholar, so I can't dive deeply enough into the subject matter to do it justice, but the mix of leftist might and a sound that actually matches my embarrassingly large collection of demo cassettes is exactly what I needed. While artists don't need to be explicitly left-wing to win my love, it's nice to know that critics who say they listen to right-wing bands because the left doesn't have the riffs are clearly and specifically wrong. As with the last demo reviewed on this blog, the rawness may get in the way for some listeners, but I cherish it. I live for finding the beauty amid the static, and there's just enough clarity in Soyuz's sound for everything to be deciphered without leaning into sterilized production.

While the whole album feels like a valiant war march, the two real highlights are "An Arduous Battle Awaits Us" and closer "Funeral March - Lament for the Fallen Comrades," which have the melodic warmth of the early A Pregnant Light demos fused with a blown out sound that calls to mind some of the hauntingly raw production of some of the more obscure LLN acts or even some of their modern Dutch peers. The latter of the two songs even touches on some of the more beautiful aspects of DSBM without falling into cheeseball melodrama and leads into a haunting use of a recording of the Soviet war march "You Fell Victim." It's this clear love for the genre in all its eras rather than paying tribute to a single style that makes this really hit home for me. Even if we cast the politics to the side entirely, (which all you "separate the art from the artist" types are so good at, right?) this is an absolute ripper of a debut. When I can also throw this in the direction of lefty metalheads who are concerned that black metal might be overrun with nazis, it just fills my heart with joy. Of note: melodies and lyrics from Soviet anthems and war marches are incorporated in a few songs, yet it's done in a fashion where it just blends in rather than feeling like a forced inclusion. Make no mistake: this is gimmick-free and cuts to the core. If you profess a love for raw black metal, it's for you. If you like knowing the musicians can actually play, it's for you. If you're sick of being told that the right-wing acts are the ones with the riffs (and let's be honest, they almost never have them anyway), this is for you.

Long live Soyuz. Let's hope there's more output (and maybe physical releases) to come from these comrades soon.
Posted by Black Metal and Brews at 7:44 AM No comments: