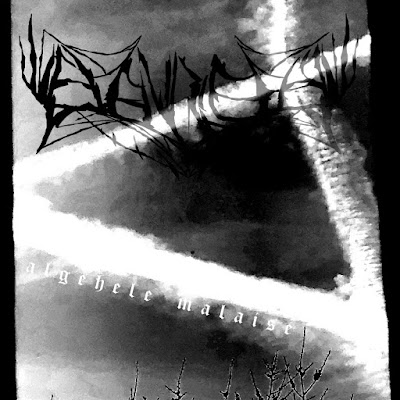 After years of writing about it, I often reflect on the things that define black metal. At this point it's possible I know less about it than I did when I began. The more we examine a thing, the more of an abstraction it becomes. When perceived from a distance, the shape is clearer, but up close it seems foreign. It's impacted my capacity to write about the genre, and yet I still find myself drawn to it. I've been slowly reading a book of horror comics by Junji Ito lately and there's a sort of running theme of l'appel du vide to it that mimics my connection to this art form. The one thing I'm certain of with black metal is that fans of the genre are seemingly drawn to obscurantism, even if the art is absolute garbage (perhaps especially when it's garbage). Of course, with the internet, obscurity is only what we make of it and a lot of these allegedly cult acts are the subject of hashtag collecting resulting in a bizarre mishmash wherein the most "elite" is simultaneously an Instagram phenomenon.
What does that have to do with Levendleed? Well, nothing I suppose, yet I keep thinking about forced obscurity as opposed to bands that simply walk a neutral path. Levendleed makes incredibly direct, yet strangely compelling black metal. It's depressive without wallowing in muck. It's energetic without being a pure blasting experience. It's just really enjoyable. And because it doesn't have some bizarre gimmick or high-contrast artist photo adorning the cover, it seems that competent and interesting music is the new path to actual obscurity and I'd like to try to rescue this album from that obscurity because I think you'd like it. True, the album art on Algehele Malaise isn't terribly engaging, but don't let that steer you away from a new experience.

Rather than falling into a pure movement within black metal, Levendleed carves a path of its own with Algehele Malaise, taking bits and pieces from multiple segments of the genre's history. Precise, discernible drumming helps elevate and accent guitar parts that could feel like tendrils stretching into infinity in this (mostly) mid-paced record. The clarity and crispness of this release makes it fresh and interesting to these ears, where the rhythm section guides the listener and the guitar often serves as a harmonic blanket. Songs like "Verstrooid" feel like they're in a state of near-freefall, while closer "Uitgeld" grows to a looming, psychedelic place that is only partially explored elsewhere on the album, giving me hope for even stranger and darker things to come. Sometimes the greatest strengths here, however, are in subtlety. The brooding lurch of "Daargelaten" and "Niemandsland" back to back is ominous and makes each hit feel just that much harder when harsh moments rise up from the calm. Levendleed's songwriting isn't complex, but each riff is memorable and direct, a quality often undervalued in black metal where artists either bury their simplicity with static or go for needlessly dense arrangements. Pairing the melodic and focused energy with vocals that sway from clean, deep chants to demonic howls ensures this isn't a one-note experience in any department, and the entire release is just deeply satisfying.
Somehow CDs and tapes are both still available from the artist's bandcamp page, so if you're a collector type, you should consider doing that. Digital downloads are always an option too. I figure I spend so much time geeking out on Dutch black metal on here that it'd be nice to highlight something that isn't part of the immediate circles of larger acts (although I obviously love all my Dutch black metal heavyweights too). Expect more writing of this nature sooner rather than later. Thanks for your patience during nearly four months of silence on this blog. I assure you there won't be another long wait before the next post.
Posted by Black Metal and Brews at 5:55 AM No comments: