Into Dungeons of Delirium: A Guide to Dungeon Synth's Stranger Side 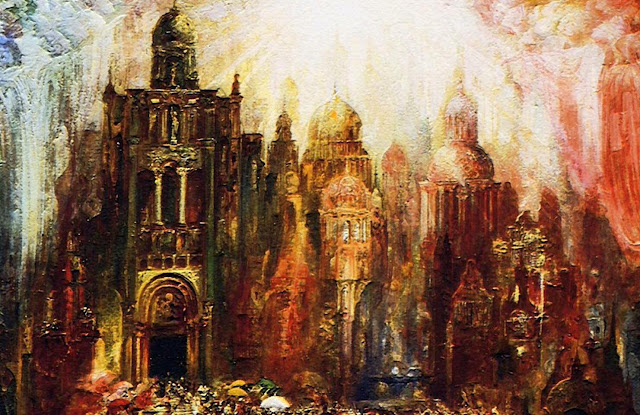 Lately, it seems you can barely traverse a piece of underground discourse without coming across mention of "dungeon synth." I'm guilty of contributing to this static myself, but I feel the recent trend of bombastic, medieval dungeon synth is missing some of the woozier, more rudimentary trademarks of the genre that won me over to such minimal sounds in the first place. I'm all for new age and otherwise higher touch stuff creeping in, as it rounds out so much of the concept, but the doors that first opened to me within the broader realm of dark dungeon music were more outsider art than they were anything else.

Perhaps this inclination many artists have towards more orchestrated music speaks to the accessibility of computer programs that assist in digital art creation, but there's something magical about simple sounds. Layered works have their own magic, but the sense that one is peering into a crude approximation of reality that doesn't resemble one's own is an experience that excites me most. While the more majestic works of newly established dungeon synth heavyweights in Old Tower scratch this itch quite well, I thought it would be worth my time (and hopefully yours) to examine a few records that capture the most delirious and peculiar side of this genre.


Roman Master- Roman Master
Roman Master is an American project that partakes in the time honored tradition of dungeon synth as an extension of black metal interlude tracks. Of their first two self-titled demos (EPs?), one is vicious raw black metal, while the other is this strained, remarkable offering of minimalist synthesized sorrow. This demo's songs bleed into one another, following the sequential theme of an individual venturing off to a guaranteed failure on the battlefield. The theme of defeat and frailty is echoed by the hissing, wavering melodies, often carried by a single thin note that just barely cuts through choral voices at their most mournful and warped. Stripped of majesty and elegance, Roman Master cuts to the heart of a specific, unimaginably intense experience.


The Embers of Tara- Realm of Sleep
Following the aforementioned Roman Master into hazy, uncertain territory, The Embers of Tara may strive to avoid such depressive themes, but delves into the uncertainty of dreams where all things that drift into focus become inherently distorted. What may sound like a tape being chewed up by the tape deck is not an accident, but rather an actuality of sleep, wherein points of reference are altered with time and in relation to one's own approach. Distinct melodies flow into new forms entirely through a series of several small shifts, until the original piece seems forgotten while facing the new, distorted version. It's a challenge to both memory and perfectionism, but chasing such fixed points is no more realistic than chasing the very nature of sleep itself. The blurred edges become the highlight rather than a detraction from the original composition, creating a world that is neither soothing nor turbulent.


Iamí- Cavernas do Inconsciente
We're slightly departing from the theme of less orchestrated music here because this is such a trip that it warrants inclusion. Iamí, whose name translates to "night" in the indigenous Brazilian Tupi language, explores self in a psychedelic sense through visual art and synthesizer sounds. Like Roman Master above, Iamí works in both black metal and dungeon synth, yet focuses exclusively on the latter on this most recent release. Plodding low-end notes feel like actual footsteps on a heavy internal journey, while more ethereal synthesizer voices float above, almost separate from the lower frequencies entirely. This separation, perhaps unintentionally, creates a sense of the consistent narrator and the circumstances unfolding around the listener. With this distinct, direct approach to the form, it allows even simple twists of the script to take on a larger significance.


Celastael- My Path
The sparseness of Celastael's two demos is hard to notice at first, as heavy reverb and delay carry single notes across broad expanses. What is most striking about these barebones recordings is not their lack of unnecessary trappings, but rather their brevity. While only one track on this demo passes the three minute mark, every song offered feels like a complete statement, offered up from the haze of a moonlit winter night. The dungeon synth genre seems to give great space to artists who blow a collection of three or four related phrases into twenty-minute epics, with unnecessary bombast in the name of "atmosphere." This is direct evidence that, while such lengthy run-times can be used to great effect (as evidenced in great measure below), a talented artist can fit the whole feeling into a fraction of the time.


Erdstall- Caverns of Endless
In contrast with Celastael, Erdstall makes a strong case for the hypnotic powers of repetition and space. With two massive tracks, Caverns of Endless flows into the doomy spirit of earlier visionaries like Trollmann av Ildtoppberg, but in a way entirely of Erdstall's own creation. Horns swell stretch into infinity, seemingly echoing off countless chambers of some vast abyss. Unlike many of the above releases, rhythm is prominent in this offering, yet not to the point of detracting from the dread-inducing drone that lies at the core of the sound. This project seems to be inactive now, after five years of silence and no other online presence. The absence is truly a shame. Now that these sounds are reaching a wider audience, it would be fascinating to see how Erdstall could progress in such a climate. One can't help but imagine it would feel like the most glorious, unending crawl to death.
Posted by Black Metal and Brews at 12:08 PM