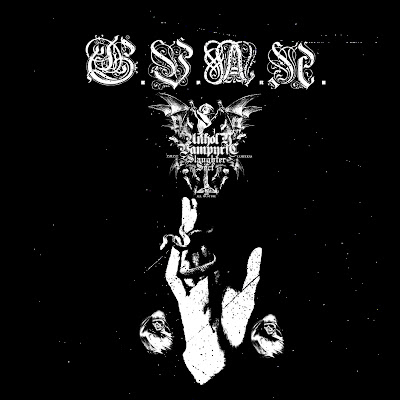 Dedicated followers of the American black metal underground have surely caught wind of the working of Unholy Vampyric Slaughter Sect in the past few years. With a slew of releases on cult favorite labels like Perverse Homage, Skjold, and Harvest of Death, the one unifying theme for this enigmatic project's fans is an extreme imbalance in terms of scarcity and supply. On last year's self-released GVAU, which stands for Global Vampyric Assault Unit, Unholy Vampyric Slaughter Sect reached new heights. However, much of the world didn't get a chance to hear or own this gem of bizarrely captivating raw black metal. Today that changes, with a reissue on cassette from Crown and Throne Ltd.

What makes this collection of songs so appealing is the variation. Sure, there's the trademark mangled buzzsaw guitars and unceasingly spastic drum programming, but there's so much more at hand. Blown out piano leads the way into the opening salvo of "Dismal Grin 666," and interludes "Blood Catharsis" and "Psychic Attack" serve as heavily industrialized pieces of pure atmosphere, with crumbling, almost mechanical percussion highlighting a vast emptiness. It enhances the otherwise grotesque and dizzying pace of things by bringing broader contrast to the greater work at hand. Still, even in the midst of things, this is addictive and hypnotic black metal of the highest order, with brilliant and memorable riffs buried in the midst of dense, complex compositions. The raw production may not suit the less depraved listener, but it's almost impossible to envision songs of this nature working in a cleaner context. As with the identity and lyrical direction of the artist's output, sometimes obscurity lends more weight than allowing the whole of the creation to be seen.

An undisclosed amount of tapes are available for purchase from Crown and Throne Ltd. Don't miss out and be a victim of discogs scalping fiends. This is an artist whose profile will only rise from here.
Posted by Black Metal and Brews at 4:12 PM