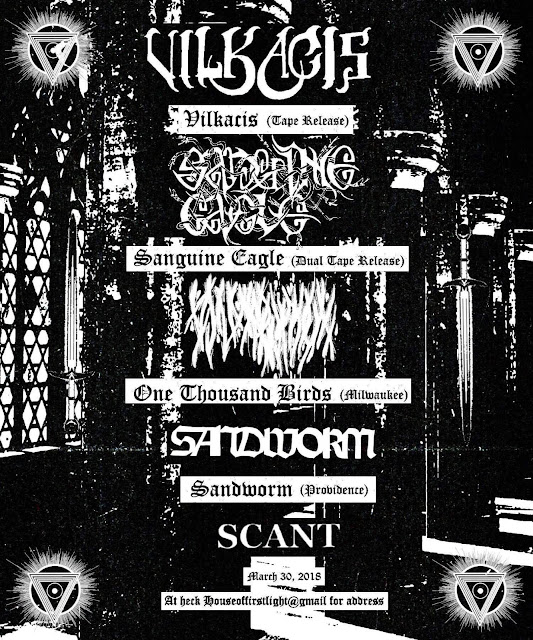 I feel very fortunate to have lived in many cities with thriving underground communities, but being in Brooklyn has its own unique set of advantages. The black metal, noise, and post-punk scenes here are all top-notch and I've been able to catch some of my favorite artists in rather intimate settings. On March 30th, fate set me up for one of the most stacked bills I've attended outside of weekend-long festivals. Curated by House of First Light, the album release show for affiliated acts Vilkacis and Sanguine Eagle was a glorious marathon of extreme sounds at the Lucky 13 Saloon.

Local noise artist Scant opened the night, with vocal accompaniment from Fizzy, vocalist of the Royal Hounds and one of the most visible members of the House of First Light collective. Scant's been on my personal "must see" list for years now, and it was wonderful to finally see the artist in action. Rather than squealing high-frequency noise or numbing wall, the slowly shifting electronic mass of Scant's approach was more meditative than anything else. It set the stage for a night of boundaries being pushed forward and was well worth the wait.

Winds of Gladsheimr were next, an unannounced treat. It was this project's first live endeavor, with Lam on drums and Eziagalis on guitar on vocals providing a sparse and tortured sound. While all the House of First Light acts shared at least one member on this night (Lam, naturally), this was by far the rawest and most depressive feeling set of the night, yet it was far too brief for these ears. A new split release emerged at the show (unbeknownst to the author of this piece, sadly) so it's clear there's plenty of material the band could've brought forth. One can only hope for more, as it would've been quite welcome.

Sandworm came down from Providence to deliver their incredibly harsh form of punky black metal, and as one of two traveling bands, they quickly proved themselves a worthy addition that added to the night's diversity and appeal. I'd heard and enjoyed their music on bandcamp before after finding them through their split with The Body, but the live experience was stronger than the recordings (which are in no way deficient, mind you). The shrill vocals and bizarre overtones that came out of the guitar made the band sound far fuller and stranger than one would expect, creating a palatable sense of tension and unease that balanced out the breakneck pace of much of the material.


Following this performance was One Thousand Birds from Milwaukee. With established members of the area's noise scene, the band's sort of blackened skramz was a real surprise. A good friend in attendance described them as "midwestern emo with At the Heart of Winter riffs," which is about as appropriate a descriptor as this ugly descendant of Orchid's legacy could earn. The dual vocals split between one microphone, diverging bass and guitar lines, and frantic drumming created a sort of urgency I've missed in a lot of the music I catch live. These guys are rather new to performing out but they're quickly making a name for themselves, so do yourself a favor and check them out before they become another band whose demos sell out before you know they exist.

Finally, the co-headliners began their sets to celebrate the release of new material. Sanguine Eagle filled the room with smoke, leaving only a small collection of candles as the visible portion of their performance. I stood front and center to witness the spectacle and was still entirely incapable of seeing the band as they performed the most hypnotic and valiant set I'd witnessed yet. The Individuation demo may have been an early triumph, but Sanguine Eagle has grown far beyond what their initial potential would've hinted at in a very short time. The monstrous swelling of guitars has reached otherworldly proportions and the band seems to channel something deeper than just a collection of sound. The feeling of their set can't be described, it's something one must be immersed in to understand, with an almost hallucinatory, psychedelic quality.


Closing out the night was Vilkacis, whose performance at Eternal Warfare Fest in 2016 was one of the best things I've ever seen live. Despite taking the stage after midnight, the band blazed its way through five of their most aggressive songs with frontman M. Rekevics (of just about every American black metal band worth a damn in the last decade) appearing possessed and furious, gripped in such a way that even in stillness he conveyed pure energy. Songs like "Sixty Three" grew beyond the confines of their recorded forms and saw the lycanthropic black metal taking full form and roaring through the room. Much of the more nuanced, melodic material of the new LP, Beyond the Mortal Gate, was left aside in favor of lean, aggressive cuts. While the monumental title track of this new record is a personal favorite, it also made perfect sense to let the most forceful songs make their mark live while the longer, more expansive material is left to headphones and personal space.


Indeed, much of what makes the new Vilkacis album stand above its predecessor is the sense of triumph through self-destruction. I've had the privilege of interviewing M. Rekevics a few times as well as chatting with him as an acquaintance and his desire to perfect himself sometimes takes on an all-consuming form. The ouroboric act of self-consumption and betterment seems at the heart here, with Rekevics seeming to fight against some sort of internal shackles that bind him. There is no end goal so much as there is a glorious struggle and pain. For a man so intensely lost in his own art and self, the precision and focus here is crystal clear, making for one of the strongest black metal albums of the year so far.
Posted by Black Metal and Brews at 11:54 AM