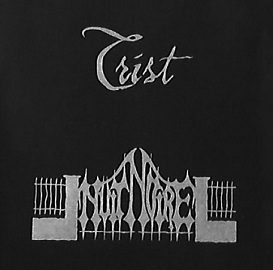 Today I'm examining an album by two bands who have been rather heavily hyped, yet have remained unheard by me until now. This split showcases that bands putting out a collaborative effort do not need to sound alike to complement each other nicely. I'll often hear a split album by two nearly identical bands that only serves to blur the line between the two and I find myself assuming that neither was creative enough to distinguish itself from its peer. The opposite seems to be true here, with two bands playing very different styles of black metal that are both quite pleasant to my ears. 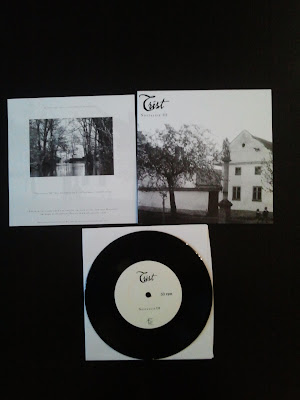 Trist gets side A of this split, using it to continue the "Nostalgie" theme. This is "Nostalgie III", although you don't need to hear the others to appreciate this piece of music. I'll admit that this is my first experience with Trist and I still enjoyed it thoroughly, despite my evident need for further familiarity with Trist's body of work. This six minute track jumps right in with a dense and melancholy atmosphere that instantly reminds me of Amesoeurs' first EP, which is one of my personal favorites. The guitars buzz with sadness and the middle of the road tempo works well to create movement without it feeling frantic and abrasive. There isn't a whole lot of variation to this song, but it honestly doesn't need it. The greyscale photography of old buildings and nature that are paired with this side of the split work to create a true feeling of isolation and beauty. I always love when a band's artwork and music seamlessly fuse to immerse me in the experience, so this gets a thumbs up from me. I've long been a sucker for the depressive side of black metal, but have found a lot of recent attempts to be less than satisfying, so this is an incredibly welcome breath of fresh air. 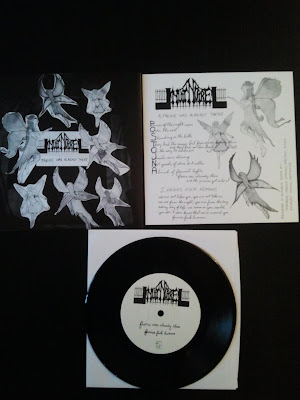 If Trist's side of the split is meant to convey isolation and nature, then Nuit Noire's conveys madness and fantasy. The lyrical fascination with fairies here struck me as a bit bizarre at first, but the artwork and music are both spectacular and the fairy theme has somewhat grown on me. While most black metal bands seem content to talk about suicide, Satan, or Tolkien, this is an interesting subcategory and it brings me some joy to hear an original idea within a genre that's been worn thin. The thick fuzz of Trist's side does little to prepare the listener for the lo-fi punk-inspired black metal that comprises these two tracks. The vocals are pretty much just shouted/spoken in classic punk and hardcore fashion, which gives these songs a little more accessibility than standard harsh black metal vocals would, and helps gives a more timeless feel to the music. This could have been recorded in the late eighties and would have still been appropriate for the black metal trends of the era, which is not an easy accomplishment. The opening track, "Faerie Was Already There" is played at a breakneck pace yet it still manages to have some great guitar leads that make it memorable and catchy. The second track, "Fairies Fuck Humans" is a bit more varied of a tune, with some slower passages creating a nice balance to contrast the intense faster sections. I like to imagine that this is what one would hear when approaching the ominous gates that Nuit Noire has chosen for their logo.

While each side of this split ends rather abruptly, it only leaves me eager to find more releases from each of these groups. If you haven't already grabbed a copy of this split, you'd be wise to do so. Both groups are prime examples of their respective subcategories within the vast sea that black metal has become, and at only seven dollars from Fallen Empire, this record is practically a steal.
Posted by benhatesmusic at 9:13 AM