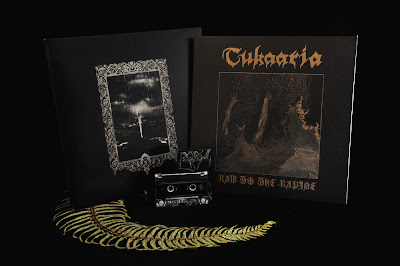 For your convenience, one of my favorite labels has released a discounted package of their three newest releases. Normally when labels package together releases like this, it's because one is a weak seller or because one is a higher profile release meant to carry along a smaller, newer act. This isn't the case here, with three of Fallen Empire's finest releases to date all packaged as one. One of these is a reissue of an album that is likely familiar to many of my readers, while the other two are new releases from familiar faces. As with every Fallen Empire release, these are available for streaming and download from the label's bandcamp page. NOTE: All images in this review courtesy of Fallen Empire's official photographer, astareth. 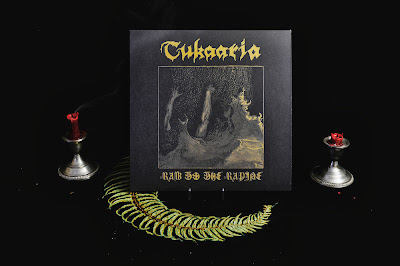 Tukaaria- "Raw to the Rapine" LP
This Rhinocervs cassette (and subsequent Profound Lore CD) gem is finally seeing the gorgeous vinyl edition it's always deserved. While I can safely assume that Tukaaria has earned a reputation as a household name for most folks who visit this blog, here's a brief introduction. As with many Rhinocervs groups, Tukaaria's debut full-length is a violent piece of raw black metal, complete with choppy drumming, alternately dense and sparse song structures, and slightly psychedelic guitar touches in all the right spots. The vocals are some of the most human sounding howls I've heard from a USBM group outside of the Colloquial Sound roster, which adds a degree of human misery here that many other Rhinocervs releases lack. As with Fallen Empire's vinyl reissues of other modern USBM classics, the fullness of sound on this release (quite possibly due to a remaster from the legendary Colin Marston) truly makes it worth revisiting, even if you've already got it on cassette or CD. Especially as part of the bundle, this is a must have due to its affordability and high quality presentation. 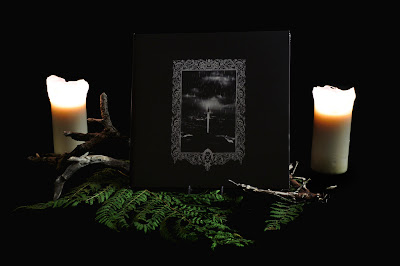 Lluvia- "Premonicion de Guerra" LP/CS
Lluvia is the newest incarnation of Lord Vast, formerly of The Rain in Endless Fall & Wylve. My experience with this album begins with the insert, which indicates that no matter where on earth Lord Vast may reside, he takes with him the spirit of true Mexican black metal. This seems appropriate, as with this album he has dropped his prior English language ties and, at least in both album and song titles, committed himself exclusively to the proper native tongue of Spanish with this declaration of black metal war. Consistently bleak in atmosphere without catering to silly tactics that many bands use to "set a mood" in black metal, this release sees Lluvia utilizing gorgeously textured tremolo-picking and well arranged clean passages to craft the direction each song will take, weaving blankets of sound rather than black metal's typically jagged song structures. As the project's name (which is Spanish for "rain") would indicate, sounds of storms and rainfall often lead into songs. While this could be easily seen as a gimmick, it feels like a respectable and appropriate sonic decision rather than a cash-in on a theme. Vast has truly channeled the raging force of an oncoming storm. His next assault is already planned for 2014, with a recently released promotional cassette of new demo tracks that managed to sell out in the blink of an eye. If this debut release is any indication, we can only expect greatness to come. 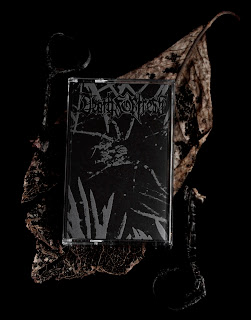 Death Fortress- "Mirror Into Eternity" CS
Expanding upon Death Fortress's excellent debut demo (and brilliant split with Axis of Light) is "Mirror Into Eternity," a clearer, more vicious cassette. For those who were introduced to this group via the SVN OKKLT compilation, the third track here, "Master-Deceiver" will be a familiar tune, and its companion tracks are all equally enjoyable. There's more of a black metal edge to this release than the debut demo's primitive blackened death assault, but the primal brutality does remain intact in the form of a very present, pummeling low end. From what I've come to understand, this is Death Fortress's last release as a one-man project. I can only imagine how heavy this project will become once recordings as a complete band commence, as it's already some of the densest, most evil one-man black metal I've ever heard. While this EP can absolutely stand on its own, I can't help but treat this as a sample of the magnificence to come. In no way does this detract from this brilliant tape, but I truly believe that an impending LP will escalate Death Fortress from "buzz band" to being a prominent artist. Keep an eye out.

Posted by Black Metal and Brews at 2:40 PM