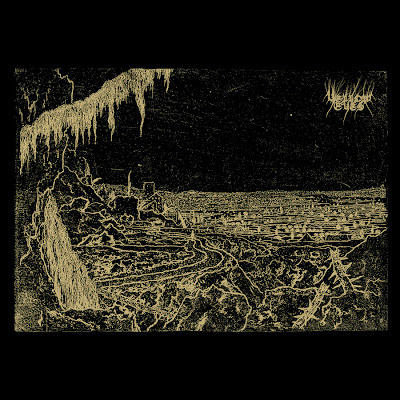 When I heard that the mighty Yellow Eyes would be unleashing a new album, it was a given that it would eventually make its way onto this site. I'm delighted to say that these dudes are continuing their trend of being great musicians with this release, which is being released by their own new label, Sibir Records. Aside from the standard edition tape, there's an incredible wooden box edition (pictured in this review) available, which was so popular that they had to make a second run of it. 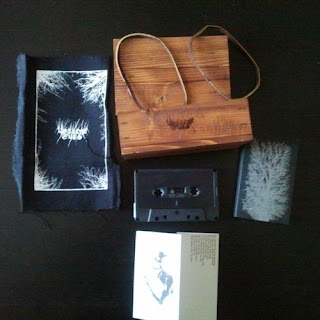 Yellow Eyes' progression musically has always been subtle, but with each release their sound has grown more fully formed and is now as well arranged as it is still urgent and challenging. I've heard some folks throw out lazy comparisons for these guys, but I feel they've crafted their own little subcategory of black metal that is unique and recognizable without outside context. The album opens similarly to their demo, with an ambient sound collage of sorts to create an atmosphere, but it's instantly apparent that things are crisper and more coordinated here than with previous outings. The music still retains its heavily textured and dense feeling but I can more easily separate the instruments from each other and the vocals feel more gnarled in the traditional black metal vein. While few riffs hop out of place anymore, the music is instead angular and distorted while it flows on a somewhat unpredictable path. Still, the music flows so naturally that I can't imagine the songs taking on another direction. What Yellow Eyes do that constantly impresses me is maintaining overtly melodic and tonal songs without sacrificing intensity or atmosphere. I can almost feel myself running through a snowy forest in the dead of night only to find a final place to curl up and die in solitude. The lyrical content's decidedly wretched nature only serves to amplify the coldness of the music, yet I feel more catharsis than wallowing or misery in the songs. This album truly displays the strength of well-made black metal that can and should bring in fans of most subcategories of the genre and serves as one of the genre's high water marks for the year to date. Highlights include the gripping opener "Light Has Fallen" and the instantly memorable "Many Long Fingers Bent In Pain," although no track on this album is lacking. If anything, I look forward to whatever Yellow Eyes' next progression will sound like.

Order copies of this from the label while they're still available, especially if the gorgeous wooden box set is still in stock. It's worth every penny and I promise you'll have a hard time swapping this tape out for anything else for quite some time.
Posted by Black Metal and Brews at 5:37 PM