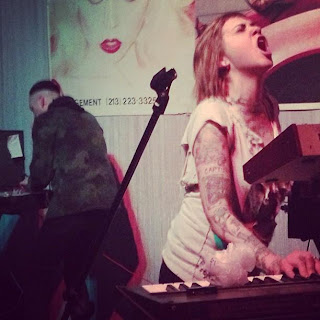 I feel if I were to say that I was hooked on this band from the first minute of the first track it would come off trite, yet here I am, going to tell it to you regardless: I was hooked within the first minute of the first track. Granted, there is the rest of the demo to attend to but Los Angeles's Youth Code manage to set the bar rather high from the onset, maintaining this energy throughout the remaining three tracks. I'd be remiss if I failed to mention the nostalgic quality I perceive in their music and I think others in their late 20s might understand why as Youth Code's music is undoubtedly industrial, with a martial yet danceable quality that, for me, harkens back to acts like KMFDM and Psyclon Nine. Hello, high-school Julio. Consisting of Ryan William George and Sara Taylor, Youth Code's beats are infectious and abrasive and perfectly complemented by harsh, altered vocals; the sum of all this resulting in a declaration of goddamnit, I just want to dance! The aggression in their music further amplifies the catchiness of the production. 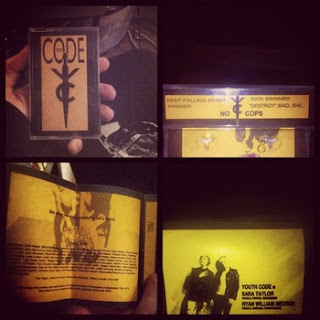 Unfortunately the tape in review is sold out however they do have a new 7" available that is down to the last 30 copies on last I checked. I really look forward to what Youth Code put out next and would love to see them live so I can strut out into the club wearing sunglasses and all-black everything. See you on the dance-floor.

Review contributed by Julio Espin
Posted by Black Metal and Brews at 9:57 AM