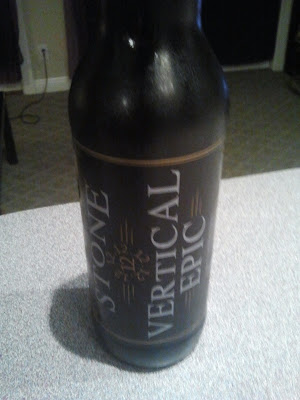 Today we're reviewing a beer that comes last in a twelve-year line of epic beers. To be honest, I've only had the last two in the series, as I wasn't of drinking age when the series began. However, this beer alone deserves a mighty legacy, and I'm sad to know that I won't be able to find this on shelves in years to come. The 12.12.12. Vertical Epic is easily one of my favorite releases from Stone, so I really hope they'll come up with a new series of peculiar annual beers to follow this up. For those not familiar, each year Stone has released a beer on a date of sequential numbers (02.02.02., 03.03.03., etc.) and it's not possible to do it in 2013, so we'll have to find some new tradition as beer drinkers.

The drink itself is a Belgian-style strong ale, with all the deliciousness such a beverage entails. The beer is thick and dark and the head is a heavy caramel color, with a scent so sweet it's intoxicating. The beer doesn't really drink as sweetly, which is a delight for me. The fruity, almost cotton candy-like scent pairs with a dark, rich beer that goes down smoothly and feels much thinner than the color would make me assume. Like most Stone beers, this is noticeably stronger in flavor than similarly marketed beers, and that's a very welcome characteristic in this ale. This is the second bottle of 12.12.12. I've had the opportunity to enjoy, and I anticipate I'll stock up a couple more for months and hopefully years to come, in case I feel the desire to reminisce about being 25. Thanks to Stone for this delicious beer. Here's to many more years of brewing excellence!
Posted by Black Metal and Brews at 6:17 AM