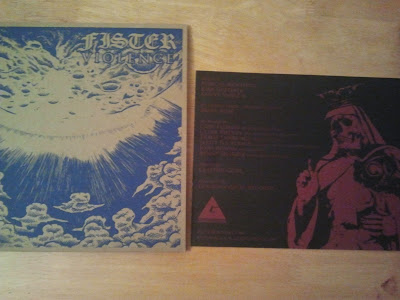 Fister's album "Violence" was originally released on cassette sometime last year, but has been recently reissued on vinyl by Gogmagogical Records. Much like the tape, (which was recently featured in a guest post from my friend Jon), the packaging and overall presentation for this record are top notch, but I'll get to that in a little bit. I remember hearing Fister's name once or twice throughout 2012, but somehow they slipped through the cracks as I devoured as many bands as I possibly could while starting this blog. I'm glad they came back onto my radar, because everything about this is just overwhelmingly awesome. 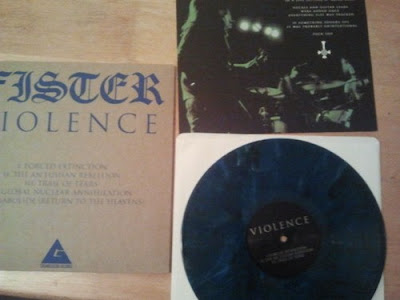 The album seems to follow the theme of humanity's self-imposed end, as evidenced by prophetic and apocalyptic song titles and atmosphere. Opening movement (it's one giant song, after all) "Forced Extinction" dives right in with a pummeling and ominous riff that sits somewhere directly between death-laden doom and crusty aggression. I'm a sucker for a heavy and memorable riff, and this album is exploding with them. The album's title also feels so appropriate for this release, as most of this record creates the feeling of being bludgeoned. The vocals are pure filth here, so any folks who prefer the cleaner bluesier sludge should probably look elsewhere, but it fits the oppressive nature of this music perfectly in my opinion. The album is practically dripping with feedback and other eerie effects, even in sparser passages, which gives the constant pulse of drums a bit more space in the mix and allows for perfect climaxes when the guitars come back in after short breaks here and there. Listening to this album, I get the sensation of digging through the crumbling remnants of the world we know today in an attempt to find the perfect hiding place, only to be torn from the earth like everybody else. If your idea of a great metal album includes slow, agonizing music that creates the sensation of being torn to pieces by some sort of great tormentor, you really need this in your life.

If the music alone isn't enough of a strong selling point, Gogmagogical has released this album in five separate packages, each limited to one hundred copies. Each album cover (and similarly colored record) represents one of the five moments and themes established on this album. The band (or perhaps the label) found a different artist to contribute for each design, and all five did fantastic work. I eventually decided upon the fifth color scheme/album cover for myself, created by artist Josh Rowan, which is entitled "Megabolide." I'm quite fond of blue vinyl and the impending asteroid presented on the cover artwork was too great to not obtain, but each of the other selections was equally tempting in its own way. I also happened to notice on the inner ring of my record that there was a thin carving that says "you've run too far" on the A-side and "you belong to us now" on the B-side. While this isn't a major packaging detail, I love when musicians and labels put as much passion into their presentation as I put into enjoying it. Perhaps the other four versions of this record have different inscriptions, I guess one of you will have to buy a different version of this album and let me know. As a final note, since I don't get to do reviews of smaller products, Fister has some super sweet beer koozies for sale that look mighty tempting to me. Hop on these before they sell out and share pictures of your loot with me. Cheers!
Posted by Black Metal and Brews at 6:42 AM