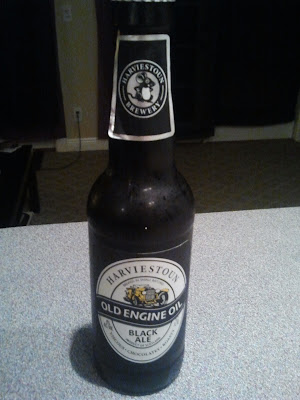 Lately I've been writing about a lot of old favorites of mine. Not to get personal, but as the weather gets colder, it seems instinctive for me to withdraw from experimentation and return to familiar, comforting things. Old Engine Oil is a beer I was first served at a traditional English pub I used to frequent when I requested the perfect pairing for a plate of bangers and mash. My server gave me one of the most perfect beer pairings I'd had in a while when she presented this delicious black ale that fulfills its name's heavy promise. As a fan of thick, dark beers, I was immediately intrigued, and I was able to savor each drop as happily as the one before. While I'm currently enjoying this beer without a meal, it's still as memorable and pleasant as it was the first time I experienced it. 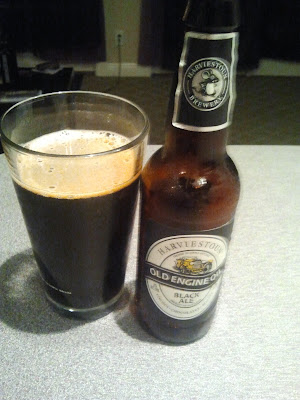 True to its name, this beer may as well have been dredged from the insides of a machine. Its dark color and thick nose would scare away many folks for whom a Guinness is too strong, but this beer's strength lies in its complexity. Despite its heaviness, Old Engine Oil is just as much of a dark ale as it is a porter, which lends a slight bitterness that fans of lighter beers will find familiar and welcoming. The malty aromas of coffee and caramel are here, as with many traditional porters, yet they accent the richness of the drink rather than comprising the majority of its flavors. The beer's carbonation is minimal, another reason the oil comparison is rather appropriate. The liquid glides across my palate smoothly, without any interference. Most dark beers are slow drinkers, but were I not drinking this with the intention of fully savoring it and writing a review, I could find myself in danger of drinking far too quickly. Still, at only 6% alcohol, this beer isn't as much of a threat as it may seem.

If you're a fan of any traditional Scottish ales, I highly recommend Old Engine Oil. If you ever want a nice dark drink to comfort you on a cold, grey day, I highly recommend Old Engine Oil. If you are making a meal that will stick with you for the next eight hours and want a beer heavy enough to pair with it and light enough to not overwhelm your stomach, you know what to get. I don't see this beer often enough, yet it always seems to be around when I'm looking for it. Seek it out and enjoy your reward.
Posted by Black Metal and Brews at 5:31 PM