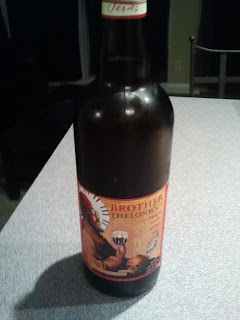 Since we're beginning a new year, I feel it's appropriate to visit one of the first beers I can remember imbibing in my early days of beer geekiness.. What used to be "that tasty beer named after a musician I dig" is now "that beer I refer to as a sibling because its name and memory evoke such a feeling." Yes, North Coast's Brother Thelonious is so dear to me I refer to it as a family member whenever it comes to visit. While the label calls this beer a Belgian style abbey ale, the internet seems quick to argue with this description. I'm not typically one to challenge a label, and I must say that this beer was one of the beers that led me toward my obsession with Belgian and Belgian styled beers. 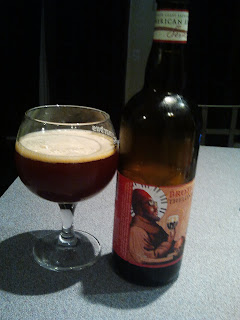 Much like the remarkable pianist this beer shares a name with, Brother Thelonious is more complex than any easy description will permit. To call Monk's music "jazz" is to sell him short, packaging him besides easy listening artists and not the kinetic and soulful madness that jazz once represented. To give this beer a simple title is also inappropriate. While the beer pours a dark amber with a nice thick head, and has an absolutely captivating scent, it's not an experience that can be understood with one or two sips and a glance at the glass. This beer is something you understand more deeply as you near the bottle's end. Crisp flavors of caramel and raisin play on my tongue, while the liquid itself slides across my palate more smoothly than a beer this rich normally would. Drinking Brother Thelonious is like a slow and playful seduction, with each sip lingering just enough to create a tense anticipation for the next.  An experiment I recommend (and how I first was introduced to this beer) is to try drinking this at room temperature. I first learned of this beer at a traditional pub, where none of the beers were served at the icy temperatures many of us Americans are accustomed to. While I was initially confused, I still was blown away by how incredible this beer tasted. That was four years ago. I'm still finding new excuses to lose myself in Brother Thelonious, and I hope this review will encourage you to do the same.

Another appealing incentive for purchasing this golden treat is the fact that North Coast makes a donation to the Thelonious Monk Institute of Jazz with every bottle purchased. This means that in addition to receiving a quite reasonably priced bottle of beer, you're directly contributing to musical education and greatness with each purchase. I know I'll drink to that. Cheers.
Posted by benhatesmusic at 8:25 AM