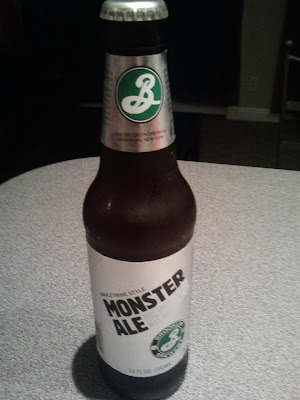 In this blog, I often describe things as monstrous or beastly, because I tend to like things that can fit into such categories. When a beer is given the name "Monster," then I know it's going to be a great fit for my blog. Brooklyn Brewery's Monster Ale definitely deserves its title and has been on my shopping list a handful of times. It's highly drinkable and a great introduction to barleywines for folks who may not have had one before. 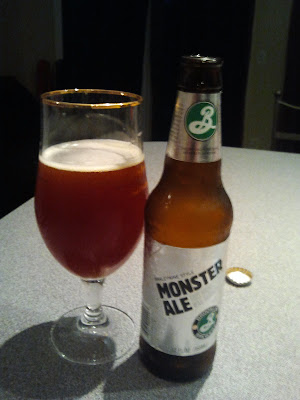 The beer pours a dark, dull amber, with a very small head. The aroma is heavy with notes of grape and honey, with a sip providing a richer version of the same flavors, with a slight hint of hops. The beer as a whole showcases the strength of a barleywine, as it somewhat treads the line between a dark beer with light hop elements and a stronger bottle of mead. The beer is intense and sweet without being thick or syrupy, and it leaves a light, crisp aftertaste. It masks its high alcohol content (10.1%) behind a veil of sweet and vibrant flavors, which makes for a fantastic drinking experience that warrants sharing instead of overindulgence. This is a relatively standard barleywine experience, but being standard doesn't make this boring. Instead, this is one of my easy go-to beers when I want more than a single bottle and I want a solid and drinkable barleywine.

As with most of my beers, this comes highly recommended, even if it doesn't sound like your normal cup of tea (or glass of beer). I'm pretty sure this beer is available year-round, and accordingly it should be a nice addition to your fridge in the near future.
Posted by benhatesmusic at 12:25 PM