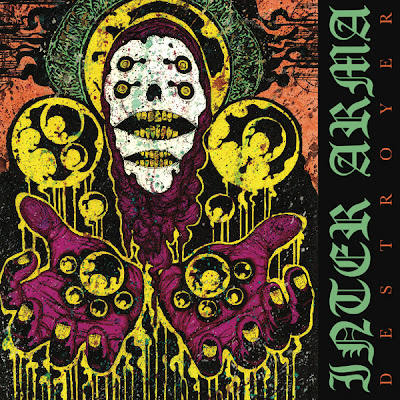 Inter Arma have been one of those bands that existed on my periphery for a year or two without actually making their way to my ears. Call it bad luck or perhaps just having too many great options at my disposal to ever really catch up on every band I'd like to hear, but I just never got around to listening to Inter Arma until just recently. I'm instantly regretting having overlooked these guys last year, because it looks like they'll be making their way into my regular vocabulary with this release. 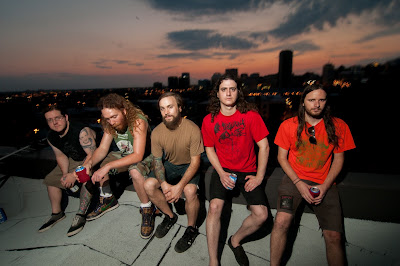 It's really hard to give a name to the kind of metal Inter Arma plays aside from just victorious and sprawling. The vocalist alternates between being a phlegmy Lindberg-like maniac with a perfect rasp and a bellow that sounds like some ancient warrior calling across a battlefield. "Destroyer" seems to work as both title and description of their musical approach, with the aggressive moments seeming victorious and valiant while psychedelic and spiraling guitars seem to slowly bore into one's skull during mellower moments. The instruments play in and through each other in ways that call to mind some of Mastodon's earlier and more intense albums and there is a constant sense of forward movement as Inter Arma slays everything that gets in its way. I'm not often into music that's this streamlined and well-polished for some reason, but there's such sincerity to this music that I can absolutely get behind this. At times I can't stop nodding my head, even though the opening track is nearly ten minutes long. This is one of the few bands I've featured here that could give some heavyweights a run for their money. This isn't just something that should appeal to the underground--the headlining acts of the metal world should be eyeballing these guys as potential tour mates. Inter Arma has the appeal and the talent, it's just time for somebody to take notice.

With a recent signing to Relapse Records, it seems that this band is on their way to bigger things, so it's only logical to revisit some of this band's earlier works before they become huge. Aside from getting bragging rights for knowing them first, you'll also be treated to an incredible EP that's well worth the cost. Grab it from Gilead Media and hope that you're still in the first 500 orders so that you can get a sweet patch and button.
Posted by Black Metal and Brews at 9:59 PM