Forgive all the delays, dear friends and readers. As some of you may have noticed, I disappeared for a week to attend my cousin's wedding in California. I drank a handful of great beers there, but basically took minimal notes and don't really feel I could write anything sufficient on them. I may post my abbreviated notes soon for your consideration anyway, but in the meantime, here's a bit of what I've enjoyed at home in the days before and after my trip. 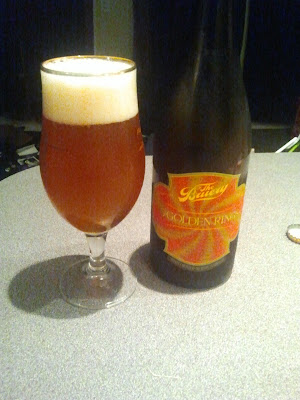 5 Golden Rings (The Bruery)
This surprisingly sweet golden ale tastes as if it has far more than five rings of pineapple sitting in each sip. An element of nutmeg or cinnamon is definitely present, but the pineapple juice is a dominant flavor that makes this drink more like a cider than a Belgian style ale. While I wouldn't go for this every day, I definitely was in the mood for it when I consumed it. This is the first I've had of their 12 beers of Christmas, and I'm definitely excited to see what they come up with later this year. 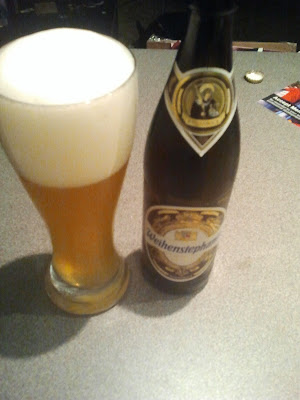 Vitus (Weihenstephaner)
I'm not going to lie and pretend that I didn't totally buy this for its name. I mean, I'm not the king of doomsters, but I love St. Vitus, which is exactly what I'm listening to while I drink this. The beer's got a massively foamy head, yet a really light body. The yeasty and sweet, almost banana-like flavor of this beer caught me off guard, but it's definitely up my alley. I'm so frequently shying away from lighter beers or anything "wheat" heavy, but I clearly need to change it up, because this one is deceptively tasty. 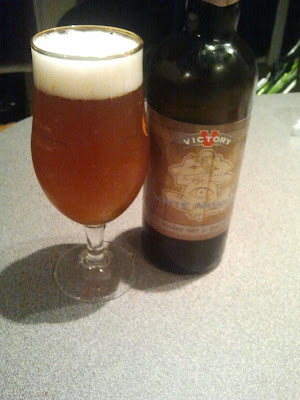 White Monkey Tripel (Victory)
As someone who has been known for introducing multiple friends to Victory's stellar Golden Monkey beverage, I pretty much was obligated to purchase this beautiful bottle of beer. The beer's amber color is rather accurate for the Belgian tripel style, yet this drink has such complexity that I'm finding a few varying descriptors that all are relatively fair. Since I'm aware that this was aged in oak barrels that once held chardonnay, I can certainly pick out elements of white wine, yet they aren't overwhelming. There's also a bit of mild mango flavor and a slight sugary bite of some sort that I can't quite put my finger on. The bottle indicates that this version is slightly more playful than the original, and I agree. I'm definitely enjoying that there's a lot going on here, but for some reason I can't see this being an every day drink. Instead, much like champagne, I feel this is a special, rare type of drink to be enjoyed from time to time. It's a limited release, so grab it while you're able.

That's it for this week's post. If you want to keep up with my current drinking that might not be featured here (or if you want a sneak peek of things to come), you can add me on Untappd or follow me on twitter. Both of these are full of my thoughts on various drinks, and the twitter account also features rants about awesome music and why being a student is bittersweet. Thanks for reading!
Posted by Black Metal and Brews at 12:02 PM