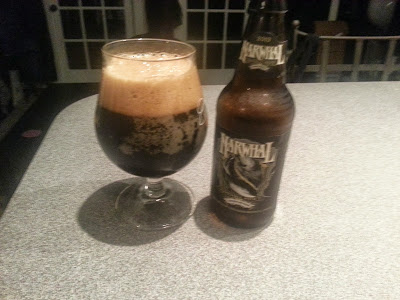 Hey readers. Perhaps you feel my beer reviews have been a bit repetitive. I know they've felt a bit redundant to me. I'm a metal connoisseur but a relative amateur in the world of beer. That said, it's silly of me to repeat the same basic set of terms for these reviews while I'm going all over the place with my music reviews. A good brewer has just as much artistic integrity and passion as any musician, so I'm going to try to spice my beer reviews up a bit in honor of the fine folks who have committed themselves to their craft.

Narwhal strikes me as a great beer to use for a renewed attempt at writing great reviews, because it's a fantastic take on one of my favorite styles of beer. The aroma's rich and textured, with multiple accents playing off each other. There aren't any peculiar or groundbreaking changes on the typical imperial stout formula, but this is a very well made beer in that it's a full experience. The liquid is thinner and the flavor is smoother than I would have anticipated, making for a surprisingly easy sipping dark beer despite its heavy nose and ten percent alcohol content. Grab a four-pack of this at your favorite beer retailer--it's Sierra Nevada so it should be pretty widely available.
Posted by Black Metal and Brews at 8:44 AM