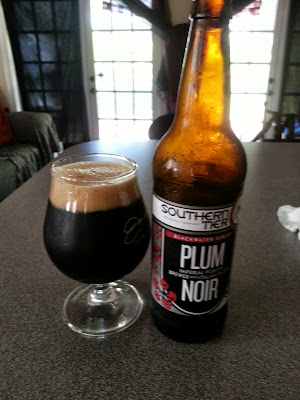 Hey folks. It's been a while since I've shared a good drink on here, and what better beer than one I've had sitting in my fridge for nearly five months? When I saw Southern Tier's Plum Noir in the store, I knew I had to have it. However, I also made the mistake of putting it on a pedestal and refusing to drink it until circumstances made for the perfect moment. What I should have been doing was including this in my semi-regular drinking routine.

The beer pours as dark as the "Noir" in the name would imply, with a frothy head that parts way just enough to allow for a decent sip. The nose is surprisingly floral for such a dark beer, and the sweetness of the plums does little to detract from its bitterness, but instead broadens the overall experience. Given that plums are a fruit with such a deep flavor, it's nice to see them getting attention here. There's also the slight coffee note that commonly accompanies darker porters. It works perfectly here. There's a light fizziness that's barely present but just noticeable enough on the tip of my tongue, and there's just an overall pleasant balance to the whole thing. Southern Tier's Blackwater Series is proving to be consistent and fantastic and just experimental enough to intrigue without confusing the palate. While it definitely might be appealing to a niche audience, it's worth trying for any passionate drinkers.
Posted by Black Metal and Brews at 2:15 PM