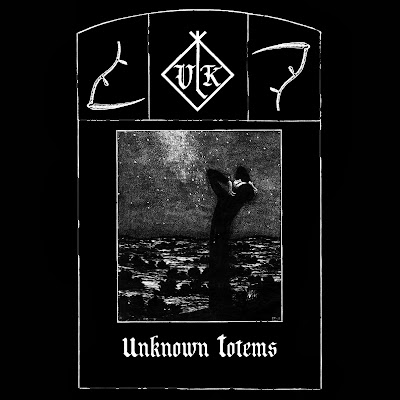 Vlk is a new project from Chicago, committed to a pensive and textured brand of black metal. Their debut EP offering, "Unknown Totems," is a brief yet wholly engaging album which has managed to surprise and impress me from the very start. I really appreciate the intricate and human feeling of the live drums on this release, as it contributes to the swells and dips in the mood that Vlk creates in these short bursts of musical chaos. In fact, the humanity of this release is where it really excels. Everything feels like it was created with real instruments, by real people. While that should often be an expected standard in extreme music, the increasing ease with which one can access digital approximations of real sound has grown greatly. It's nice to see such a raw and impassioned release from a younger band. Vlk has indicated intentions of a cassette release in the near future, which I feel will perfectly capture the urgency of this music. While very little information is publicly available about Vlk, their facebook page lists an interest in agronomy, which tells me that they have either a scientific leaning or an interest in living in greater harmony with the earth. Also of interest is their decision to close this EP with a cover of "Echelons" by For Against. While I often feel it's ill advised to include covers on early releases while still developing a reputation, it's nice to see a black metal band exploring outside of the greater boundaries of heavy metal right from the start. If anything, this indicates that Vlk probably has some interesting expansion in mind for future releases. 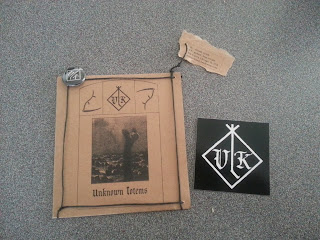 "Unknown Totems" comes beautifully packaged in a handmade slipcase with a Vlk button and vinyl sticker. These are individually numbered out of thirty and only six remain, so I urge my readers to grab this as quickly as possible. If you're a spot late or not interested in CDs, it's also available for download at the price you see fit so there's no real reason not to give it a listen.
Posted by Black Metal and Brews at 12:48 PM