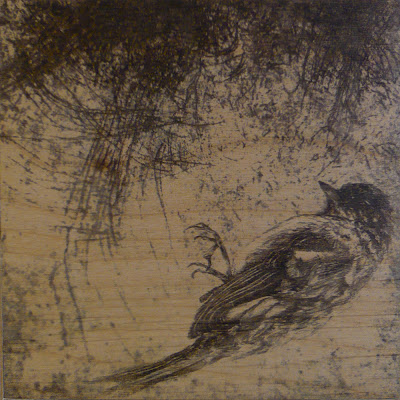 Just over two months ago, I was fortunate enough to interview a death cinematic, who briefly made mention of a future cassette release from Tycho Magnetic Anomalies. Such a short time later, I find that a copy of this cassette has made its way into my hands (and many other copies are available for purchase), and I'm finding myself surprised once again by an artist whose music has already been in my thoughts for years. As always, a death cinematic has outdone himself with both presentation and music. This is his first cassette release, and he has transitioned quite nicely from digital to analog with this album. 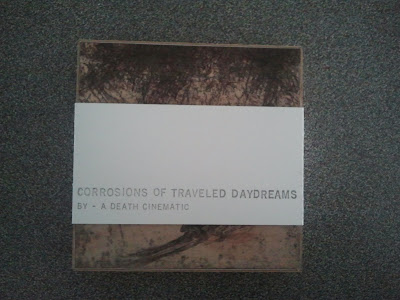 a death cinematic has always had an audience with the drone metal community despite lack of any direct "heavy metal" sections in the songs, but the very first moments of "Corrosions of Traveled Daydreams" consist of a nearly galloping riff that lasts just long enough to disintegrate into cleaner, gentler territory than I've usually heard from this artist. The contrast between two new extremes presented here had already gained my interest, but even without context of a death cinematic's other releases, this album impresses me. Clean guitars seamlessly integrate with the hum of gently rolling drones, and melancholic notes stretch slowly across percussive static. Despite the melody so often displayed, this is not so much a reflection of joy as it is the aural equivalent of the last glimmer of hope. These are not songs for the victorious nearly in the sense that these are songs for survivors. If there is any beauty at all, it is only in the knowledge that the world will continue its course regardless of humanity's intentions. Desolation and rebuilding have long been at the heart of a death cinematic's sound. With this release, the two have merged into a sort of functional emptiness. From soft to entirely jagged, the sounds and colors swirl and  soar through a bleak and unchanging landscape. The world a death cinematic shares here may be covered in soot, but its rivers still run and the roots of the trees still grow. The song titles and sonic paintings tell of a human race that has lost itself in a way that would make Cormac McCarthy smile, if he's capable of such a thing. There is little good left in humanity, and nature will eventually undo our messes when we finally finish destroying ourselves, at least if I've been listening properly. 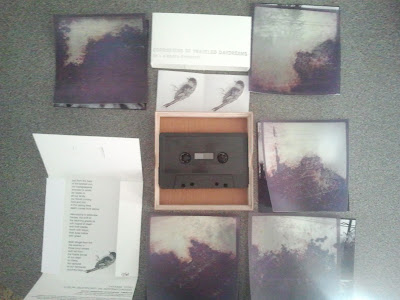 Perhaps my words have been a bit abstract here, but when dealing with music of this nature, I find concepts and feelings become stronger than genres and ideas. a death cinematic works just as much in textures and blurred sounds as with defined song structures and discernible instrumentation. To limit a review to simply touching upon the musical characteristics would be a disservice to music that is created with such a visual and conceptual approach. In fact, accompanying this album are a set of photographs and vellum prints, along with a poem, an etched wood box, and decals with the album cover's trademark dead bird. The entire experience of this album is both humbling and impressive, and demonstrates an expertise that I hope to witness again soon. This release has been limited to a mere 60 copies, yet some are still available from the label at this time. As a reviewer and lover of music, it's my duty to recommend you purchase this before they sell out.
Posted by Black Metal and Brews at 3:11 PM