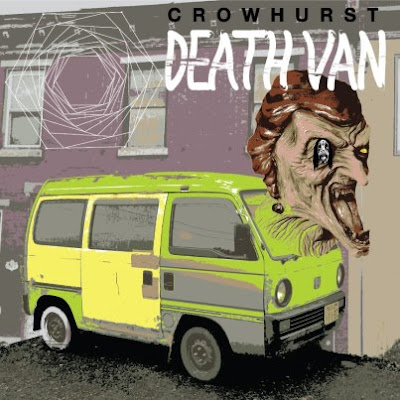 I awoke today with an anxiety in my mind that wouldn't go away.  There has been a high pitched noise in my bedroom for a week now, and it's really started to trouble me. My sleep is restless and my thoughts are hazy. I often feel like I'm not really present because I'm so exhausted. When I put on Crowhurst's "Death Van," I felt like somehow the inner uneasiness and tension had fallen out of my brain and into my computer's speakers. From the trippy and slightly disturbing artwork to the scattershot approach to noise that Crowhurst is making their name with, a ride in the Death Van takes you through pretty much any experience you can imagine. 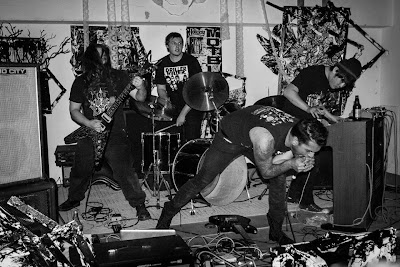 From the opening track "Enter the Death Van" on, things are ugly, but not in the chaotic sense that such an album title would imply. Instead the noises roll through and around the listener as a slow and constant waves of sound, bringing one in and out of a claustrophobic sort of madness filled with sharp sounds and feedback. After a while, rather than feeling fear or horror, a dull euphoria sets in. By this point, you've given up on hope and instead you've embraced the insanity--this is the point where Crowhurst excels. When one is forced to find solace in the bleakest of places, Crowhurst is able to effectively guide the listener in any direction. With the help of more than a couple friends, (almost every song here has multiple guests), Crowhurst drives the Death Van full of listeners on a guided tour of Hell in a way that's almost comforting. When we are able to look fear and misery in the eye, we are able to make peace with them. At its peak moments, this album takes the hideous and makes it beautiful.  By the time we've all been beaten into submission, the gag is taken from our mouths and the chains are undone. An almost blissful rendition of the Death in June classic "Rose Clouds of Holocaust" provides a final moment of comfort and beauty, much like the last ten minutes of mental function before brain death occurs. The end is abrupt, yet haunting, leaving you with only one option: to enter the Death Van once again and repeat the cycle.

This album goes on sale on vinyl from Placenta Recordings and cassette from Static Reason on Friday, March 15th. Getting this is pretty much mandatory if you're at all interested in noise, drone, or just bizarre experimental music of any sort. Downloads aren't available from the Crowhurst bandcamp, but a full-album stream can be heard to help you realize just how rad this album sounds.
Posted by Black Metal and Brews at 8:14 PM