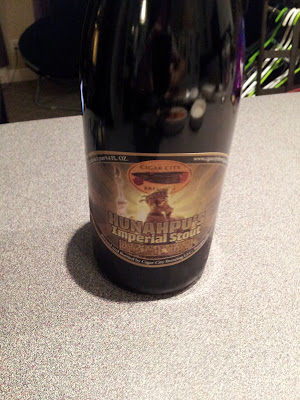 I never thought I'd get to write a review of the legendary Hunahpu from Cigar City, but my roommate was lucky enough to obtain a bottle for household sharing. This beer is released one day each year for the public's consumption, and the crowds come in from all around the country. Last year I remember speaking to folks who had traveled down from New York, and I somehow I doubt they had the farthest journey. Blessed with a near-perfect track record with ratings of 100 from pretty much every beer resource, this drink's growing legend seems intent on competing with Pliny the Elder. Regardless, when this showed up in my home, I knew I had to try it. 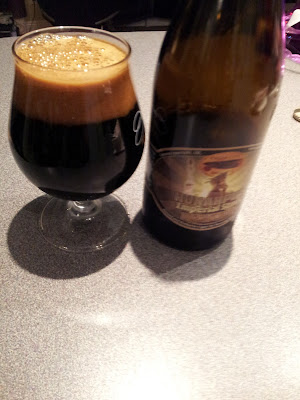 Hunahpu pours dark, heavy, and with one of the thickest and darkest heads I've ever seen. This beer isn't just a stout, this is a stout for people who like it dark and heavy. In other words, this is possibly one of the most worthy brews featured here. The chocolate aroma is intoxicating, just in case the 11% alcohol isn't high enough. The smoothness of the beer masks the heaviness well, although a heavily roasted flavor lingers on the back of my palate as I swallow each sip. Obviously this beer is being shared between four people right now, and it's still strong enough for each of us. While it tastes good enough to hoard, it's strong enough and worthy of sharing. I doubt most of you will have the opportunity this year, but keep an eye on Cigar City's website and make travel plans for Hunahpu's Day 2014. I promise it'll be worth it.
Posted by Black Metal and Brews at 11:28 AM