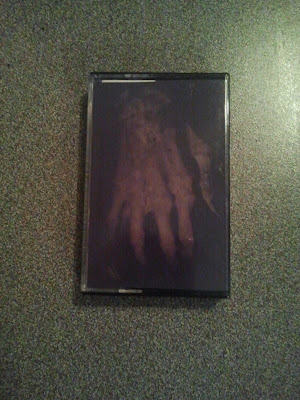 Sometimes when examining an album, I get the feeling that there's a greater context to the music than might initially be given. Whether it's lyrical themes for some bands or a larger sense of purpose associated with a particular album, knowing the background story can deepen one's appreciation for a piece of music. Jason Hodge's recent release,"Hope Has Abandoned Us," is absolutely an album whose value and weight grow immensely with proper background information. This cassette was recorded during a dark period in his life shortly following the death of his grandfather and the flooding of his surviving grandmother's home. While many artists would be content to merely use grief or frustration as a catalyst for creating something, Jason Hodge decided to record a large portion of this album in the abandoned building, utilizing items found in the house as part of this cathartic and dense recording. 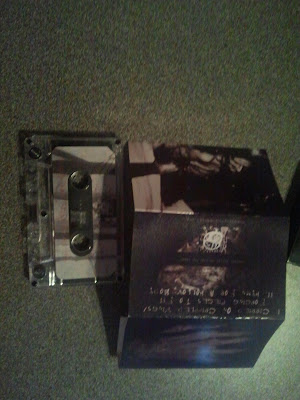 The A-side contains the track "Carried on Crippled Wings/Forcing Pieces to Fit," which is a dark and seething journey that makes me envision a world entirely in grayscale. Musicians whose works fall under the general umbrella of "noise" often tend to feel disconnected, but Jason Hodge's music seems personal, urgent, and even somewhat desperate and frustrated. There is a tension that impresses itself upon the listener. This isn't harsh noise, nor is this mellow drone. What this music does is convey emotions in a genre that often lacks them. If anything, I feel almost overwhelmed by the swelling sounds presented in this first side, which attack like waves against a flimsy barrier. As hasty structures tend to do, the sound barrier gives way after a few minutes to a rolling terror of lower frequencies akin to the engine of an aircraft or the base of a waterfall. The rest of the song continues as some sort of violent deterioration, with scraping percussion fighting with the rolling noises of water or heavy machinery for aural dominance until everything has been ruined and the chaos slowly fades beneath its own weight. The intensity is unparalleled without resorting to some of the easy shock tactics of the genre, which is what makes this tape so compelling. Even at its most aggressive, this album never becomes a barrier of assorted frequencies, nor does a violent vocalization ever make an appearance. Not that those ideas or sounds are necessarily bad, but many artists fall back on them as safety nets where bolder sounds might have worked just as well. The B-side here is home of "Hymn for a Hollow Body," which appropriately enough is a slightly more tonal track, although it is entirely cold and distant, with much of the song's first few minutes sound something like echoes of wind in a cave. The song progresses into an almost mechanical howl which constructs a great rolling emptiness of sorts, a center of nothingness in the song around which all the other sounds revolve. By the time this turbulent tape has ended, the subtle hum of speakers conveying silence is a welcome comfort in which I bask for a few minutes. In a way, the phantom sounds constructed by my brain after this album are almost the perfect counterbalance to the chaos it inflicted. I feel that perhaps this whole album was designed with such a purpose: to force so much pain out that nothing but cathartic bliss remains by the end.

Copies of this tape are currently available from Enemata Productions and are well worth obtaining while they're still available. Keep an eye out for Jason's upcoming releases; he's a very efficient and productive musician and he seems to pop up on new labels all the time.
Posted by Black Metal and Brews at 6:00 PM