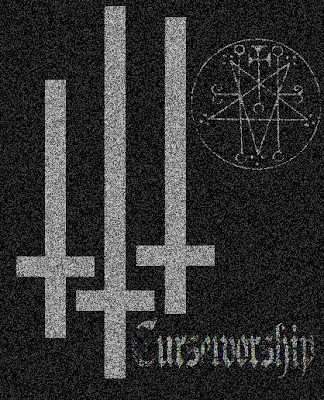 Today's submission comes from the dry, desolate wastes of Salt Lake City, Utah. I've always been of the opinion that any city that is primarily ruled by religion or conservative values is inherently good for making ugly music as a form of rebellion, and Curseworship seem eager to prove me right. This trio has released a three-song album that would terrify the piss out of any clergyman unfortunate enough to witness it. If the band's name or the three inverted crosses gracing the album's artwork don't make it apparent, these guys have definitely chosen to side with the darkness. 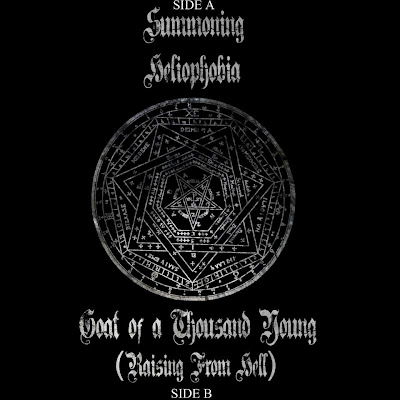 Leading the way into Curseworship's madness is the appropriately named "Summoning."After a brief feedback introduction, the stage is set for some straight up ugly, crawling death metal with some static noise elements thrown in just to make things even more unsettling. The cave man stomp here is thick and well-executed rather than simply aping Obituary as many similar bands tend to do and the rhythm is tight and driving. When the band decides to pick up the speed about halfway through, it's somehow surprising yet the transition feels organic rather than forced. The second track starts off with yet another surprise, a light and melodic introduction that turns into a distorted mess of a song that lingers slightly longer than its predecessor. Closing this beastly album out is the sixteen-minute long horror of "Goat of a Thousand Young (Raising From Hell)." This album is full of surprises, but nothing surprised me more than this track. The eerie power electronics that wormed their way throughout the previous two tracks have finally taken over by the time this monstrosity unfolds, leaving a huge slab of dense noise as Curseworship's final offering to the listener. Rather than finding this a bit uninspired or simple, this is a hair-raising way to end the album and I approve.

While currently only available as a "pay what you like" download from Curseworship's bandcamp page, this album is tentatively scheduled to be released on cassette through Crucial Blast sometime this spring, so keep an eye out. I know I'll be first in line.
Posted by Black Metal and Brews at 7:34 PM