Year End Extravaganza: The Most Beautifully Packaged Tapes of 2012 (According to Jon from The Inarguable)


This post marks a Black Metal and Brews first: a guest writer. Today's guest writer is Jon from The Inarguable, a blog that is well worth your time. In addition to being a stellar blog (with more frequent updates than mine), The Inarguable is actually one of the reasons I decided to start a blog of my own, so it's only fitting that the first guest post is shared with its creator. Without further rambling on my part, here's Jon's list of the most beautifully packaged tapes of 2012.

As a music enthusiast and critic, on average I run into a metric ton of tapes at any given time. A cheaper analog format than its foot-long cousin, the cassette tape has made its resurgence within the past few years, with tape-centered labels like Colloquial Sound Recordings and Brave Mysteries absolutely dominating the blogosphere and endorsements from the high profile (and hopefully slightly resuscitated) Hydra Head Records. Of course, while J-card artwork can gain lots of favor, it's when labels and artists go the extra mile via extended packaging that really champions the return of the tape.

Organized alphabetically. If I have it, chances are I like it, so no need to organize by favoritism. Most of these are sold out, but you should definitely find them.

This is some sick stuff, half second wave black metal, half crawling doom, and 100% raw & tortured. As a fan of insane voice sounds, vocalist X's high pitched shrieks are so jagged they manage to pierce through the harsh, lo-fi distortion. Whoa. But this list isn't about the music, so let's talk packaging! The standard edition is pro-printed and housed in a jewel case, but I managed to snag the last copy of the limited-to-30 special edition, which has the jewel case wrapped up inside a piece of screenprinted cheesecloth, then tied up with twine. The fibrous nature of the cheesecloth turns the already ominous cover art into a nightmarish, warped horror. Awesome.

Oh look, another Sanctum Abyss release! Yes, these guys do a "special edition" of all their releases, and the creativity just keeps building. Battle Path's Weakling-school of black metal met with angry, melodic sludge fits perfectly with the special edition's screen-printed bag of cow's teeth. I hear the label was looking for human teeth, but I imagine that would involve some hefty legal stuff. 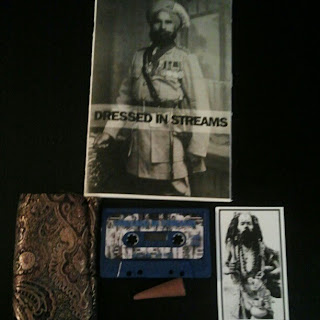 Colloquial Sound really went above and beyond with a few of their Fall releases, but this Dressed in Streams tape shows them really going above and beyond their already excellent track record. The tape, sans jewel case, is housed with a cone of incense inside a hand-sewn bag. If that wasn't enough, Azad Hind comes with a special art zine which depicts the faces of the British Raj. Funny story about this one, I guess the incense cone managed to make our entire batch of mail smell great. My mom was convinced a package from TotalRust, a label based out of Jerusalem, was the source of the smell due to its Middle Eastern origin. Silly mom, but you were half right, I guess. Oh yeah, and Dressed in Streams's massive, atmospheric black metal is excellent, to boot. If you are not familiar with CSR, you should. Keep an eye out for more special handmade editions, because I hear there will be more.

Fister really came out of the blue, but I'm glad I was able to find them before this ridiculously packaged tape sold out. The tape itself is housed in a laser-etched black polycase, which is placed inside a screen-printed reel-to-reel box with a screenprinted artbook. The ink used in the artbook and on the box was mixed with three vials of the band members' blood. Brutal, and all-too-fitting for Fister's brand of extraordinarily heavy sludge/doom metal. Though this box is sold out (I appear to have grabbed the last one), the band will be re-releasingViolence on vinyl, and I hear there are loads of color choices.

Andy Lippoldt's pet project Persistence in Mourning has gone through an interesting evolution, growing from his roots in traditional funeral doom to an eclectic entity, taking influence and collaborating with the weird and unsettling. If you recall my review of Confessions of an American Cult, Lippoldt concentrates on abstract sounds to put forth his heavy hymns through the medium of harsh electronics and bizarre industrial sounds and Absent God/Sleeping Giant is a further continuation of Lippoldt's adventurous spirit. Black Horizons says this tape "[c]omes packaged in a double OBI with a two panel insert as is becoming the new Black Horizons style. Printed offset with silver ink on moss metallic card stock. Also includes a silver ink on black fabric patch. Silver labels." Let me tell you, I was afraid to open this tape, because everything was so snugly put together I knew I would mess it up somehow. I did, but only at first. Everything fits together like a puzzle with this one, and, yes, that goes beyond the packaging.

I wanted to at the very least mention the way SIGE, Aaron Turner and Faith Coloccia's imprint, so carefully packages their tapes. Again with the reel-to-reel boxes, SIGE seals them with heavy foil strips and includes hand-sewn artbooks. It's great, and so far their tape output has been nothing but excellent. 2012 brought about SIGE releases of Locrian and Mamiffer's Bless Them That Curse You, Circle guitarist Jussi Letisahlo's Interludes For Prepared Beast, the excellent Pyramids/Mamiffer split, and the Jodis Secret House/Black Curtain 2xCS box, all of which were expertly planned, packaged, and performed. SIGE deserves all the recognition they get.

This one I bought on a whim. I'd seen Velvet Robe's full-length floating around the doom download blogs and I wasn't too sure about it, so I just sort of brushed them over and moved on. When I saw the De incertitudine... tape for sale, I honestly didn't even listen to it before clicking the "buy" button. The entire package (a tape, candle, pin, and envelope with photos and instructions) is held inside a drawstring bag. The tape tape, which is labeled with an old fashioned labelmaker, is housed inside a heavy paper box with the cover artwork sloppily xeroxed and affixed with glue. Normally I would say "amateur hour," but the hasty, sloppy approach taken with this one makes it all the more sinister. This tape is intended for you to crossfade each side into one big, horrifying ambient/noise track, ridden with incantations and old movie samples. Pretty different than Velvet Rope's usual heavy drone/funeral doom, but these guys definitely flexed their creative muscles with this one. I like the old Sears catalog which came with it, too, for some odd reason.

Another surprise, and from my home state of Illinois, Witch In Her Tomb unleashed a scathing EP of wretched, incredible black metal a la Peste Noire's early material.Man, when this style of black metal is done right, it is done right, and Witch In Her Tomb spare no extravagance. Violins, grand pianos, and acoustic guitars in black metal without losing any power? Sounds pretty good to me. This one's packaging isn't extravagant, but the simplicity was refreshing. A tape housed in a polybag which was then crammed into a lightweight paper O-card. Again, not extravagant, but it's nice to see labels foregoing the usual jewel case packaging for something a little more memorable.

I gushed about this one's packaging in a recent review on my own website, and I'll gush about it again! Though Coleman normally takes the "special edition of x amount" route, the entire edition of 100 tapes was graced with his boundless creativity. I stumbled when I attempted to describe this one, so I'll quote the label: "Pro-dubbed, pro-printed clear c42 cassettes in soft polybox with hand-numbered insert and vellum/construction paper o-card. Limited edition of 100." Unfortunately this one is all gone, but you should keep looking. Sol y Nieve also expertly packaged the Yellow Eyes demo earlier this year, wrapping the jewel case in a Yellow Eyes patch, and the first ten copies of the Dead Dragon Mountain album were housed in a plaster box. Noah knows what's up.

-Jon
Posted by benhatesmusic at 5:22 PM