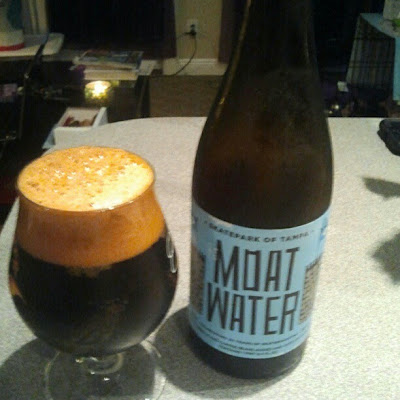 As we wrap up the year's festivities this evening, it's time to raise a toast of sorts to the things that make our lives better. I can't think of a better way to do so than with a beer honoring the Skate Park of Tampa's 20 year anniversary, which falls in 2013. Even though Cigar City is far younger than the Skate Park, they've crafted a very mature beer for this special occasion. It's a dark, delicious stout, with smoky hints of vanilla and dark coffee melting into a smooth maple finish. The legend behind this beer is that there's a drainage ditch behind the Skate Park lovingly referred to as "the moat." A liter of the water from the infamous moat was taken back to the brewery where it was mixed in with the batch of beer, providing the name (and a sense of dread) to this delicious beer. While the drink sounds dangerous, welcoming in a new year with a small and delicious risk is quite suitable and appropriate. Drink safely and in good health. Here's to another year of stellar beers and music!
Posted by benhatesmusic at 11:34 AM