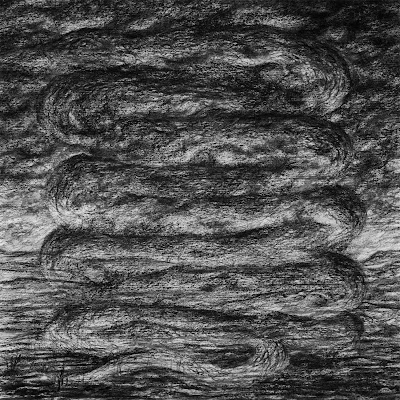 One of the harder things I've been doing as a music writer is learning to set aside assumptions or previous bias when examining a new piece of music from a band. Some bands I once disliked have surprised me with their growth, and some bands I've loved have produced sour music that didn't quite sit well with me. While examining the new Ash Borer album, I found myself neither disappointed nor newly converted. Instead, Ash Borer simply created something that met my already high expectations while completely changing my understanding of their music and its purpose. To be honest, after multiple visits with the undulating menace of Bloodlands, I still feel like I haven't fully grasped this album, but I am totally okay with that. Rather than simply giving up the goods on the first listen or five, this album slowly unravels after multiple listens, growing richer and more haunting over time.

Each of the two tracks on this bleak voyage meander past the fifteen-minute mark, showcasing a tendency toward massive scale compositions rather than brief, easily digested songs. The length of the songs is nothing new for Ash Borer, but as with each previous release, the intention and direction has evolved with these tunes. Instead of basking in simplicity and repetition as many black metal bands might, Ash Borer set up two musical pieces that flow in movements, with variations and recurring themes that feel more like the work of a masterful storyteller than a standard heavy metal band. The dystopian soundscapes that Ash Borer travel through with this next step in their sonic evolution bring to mind works of terrifying visionaries Blut Aus Nord (especially some of the bleaker moments of The Work Which Transforms God) or the otherworldly sculptures of H.R. Giger rather than the simplistic fury of black metal's earliest pioneers.

The A-side of the record contains the song "Oblivion's Spring," a slithering creeper of a track that moves through some of the coldest sounds I've heard from this group, traveling in a sonic form that somewhat mimics the sidewinding shape of the album's cover artwork. In case my words haven't already made it clear, Ash Borer's music is so visual to me that I might even say it's a struggle for me to describe it in basic musical terms. Bloodlands is an album that is sensory on a level that defies mere sonic interpretation and often makes its way into categories of pure experience. The song takes its time building up a dreadful ambiance before kicking into anything resembling conventional metal, and it glides out of existence with an eerie denoument that will get plant itself in the deepest recesses of the listeners brain, only to be conjured up again as one struggles to find sleep. When the band isn't creating soundtracks to my deepest anxieties, they're throwing out some of their most compelling riffs to date, paired with stellar key lines that fuse with the guitars rather than fighting them for space. By the end of this fifteen minute journey, I feel as though I've traveled through and past the grave, into the cold light of eternity. The B-side contains two separate songs, "Dirge" and "Purgation", which are paired together as one monolithic piece nearly twenty minutes in length. If the first track wasn't exciting and challenging enough, the mid-paced nightmare presented on the B-side of this album is the aural equivalent of slowly having one's flesh peeled off, and should leave listeners feeling both delighted and possibly unsettled.

Bloodlands will be available for pre-order in the very near future from both Gilead Media and Psychic Violence. If the challenging statement of last year's Cold of Ages wasn't ambitious and dizzying enough, then Bloodlands should impress even the naysayers who would love to lump Ash Borer into some heap of generic USBM groups. While I hate making a judgment call this early in the year, expect this to receive serious love from myself and other music writers when we round up 2013's top releases, because I'm already hooked.
Posted by Black Metal and Brews at 5:59 PM