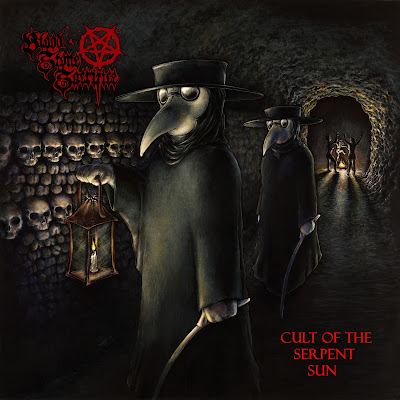 When reviewing an album like Cult of the Serpent Sun, I tend to start asking myself questions before I listen to it. My first (incorrect) assumption was that this album was going to be some sort of At the Gates worship in the vein of almost every metalcore release between 2001 and 2005. I'm relieved that the similarity is in title alone and not in some sort of sonic theft, although I'm curious if this is meant to be a concept album or if it's just got an ominous title and artwork that hold together a collection of independent songs. I've long been a fan of the imagery and history of plague doctors, so seeing them featured predominantly here has my mind abuzz with possibility. 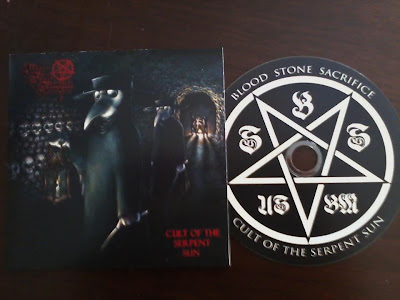 With my anticipation set on high just from the art (and potential concept) alone, I give the music a listen. What Blood Stone Sacrifice present here is well-executed, fiendishly-paced black metal. Knowing that this album is essentially the brainchild of two people makes sense. Every riff and every section of every song on this album is good and I can nod my head along, but I personally would like to see a little more variation here. Outside of this recording, Blood Stone Sacrifice has a full live lineup, including a real drummer as opposed to the programmed drums featured on this recording, and I wonder how that impacts their sound. All the components of solid enjoyable black metal are present, I'd just like to see the execution taken a step or two farther. I'm especially intrigued by the closing track on this album, "Vermin," as the opening riff instantly caught my attention. I want to hear what these guys can come up with next, because this sounds like a solid, honest recording from a band who is nearing a full sound. The guitar tone mimics the classic Darkthrone sound and the vocals are nice and filthy, so all that's left is a little more spice and I can see these guys really impressing me next time around.

If you want to get on the Blood Stone Sacrifice train while they're hot, check this album out on their bandcamp for only $2.50 or you can contact the band through their facebook page to place an order for a physical copy.
Posted by Black Metal and Brews at 7:21 AM