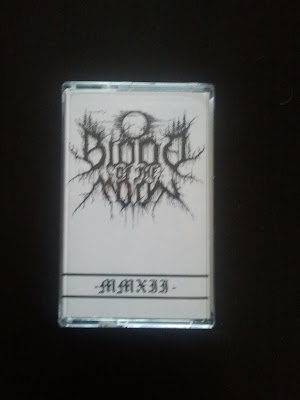 Tampa-based Wohrt Records has been a source of surprise and inspiration to me for the past couple of years in which I've resided here. Wohrt frequently releases music by bands I've never heard of who manage to completely annihilate most of the competition. Blood of the Moon are a self-described Heathen Horde from New Zealand, and this short yet brutal demo is no exception to the tradition of quality that Wohrt has established. In a genre where original names are running short, the band's name alone manages to evoke an ominous image, and the music presented within absolutely fits the bill. 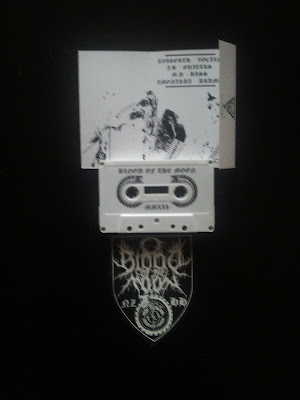 This cassette holds three tracks, one of which is an introduction. The introductory track alone captivates me as a listener, with some of the coldest riffs I've heard in a while setting the pace for the brief onslaught to come. The first full track, "Conquered and Forgotten," (perhaps a nod to the mighty Judas Iscariot?) is the aural equivalent of pure punishment. This song is a perfect sonic representation of both the ultimate chaos of war as well as the torture often received by prisoners of war. Many black metal bands play with imagery of war, torture, and the like, but few bands can actually capture the haunting essence of the battlefield and the horror of man killing man, but Blood of the Moon have successfully created a sense of fear, terror, and hatred that takes my mind to darker places than my own eyes have seen. The closer, "Desecrate Upon Thee" carves itself into the listener's ear with equal brutality and skill. I've been nodding along the whole time while writing this review, and on all prior listens. I know of few bands from New Zealand, but all of them are worthy forces. I feel that Blood of the Moon is in good company then, as they've already earned my respect with this brief offering of hatred and venom.

Wohrt has initially released this in a batch of 100 cassettes, with the first twenty containing a back patch and the remaining 80 containing standard sized patches, all of which are beautifully crafted. Much of the stock remains at the time of this publication and I urge my readers to obtain this cassette while Blood of the Moon is still a young force. I imagine that in years to come this release will grow in value and become a valuable collector's item.
Posted by Black Metal and Brews at 12:30 PM