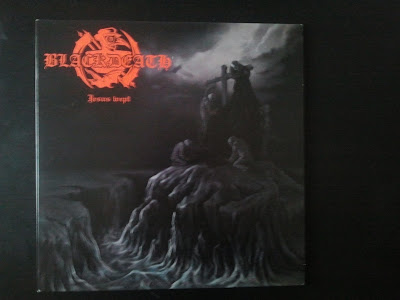 Russian horde Blackdeath are a group with a relatively lengthy history and discography, but I'll admit this is the first album of theirs I've purchased. With well-received releases on many labels, this 12" EP is their first release via Floridian label Wohrt Records, and it's a worthy introduction to Blackdeath's vicious brand of black metal. 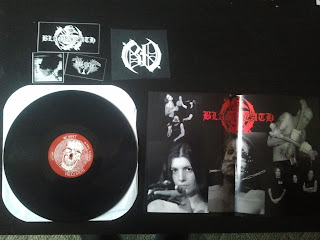 "Jesus Wept" is a ferocious slab of mid-paced black metal that conveys the bleakest of atmospheres. The music has a nebulous, almost warped quality to it that sets this record apart from many other black metal groups. While the record is meant to be played at 45RPM, it still has a dark and deep quality to it that initially made me double check to make sure my turntable was playing at the right speed. While some folks may find the depth a bit peculiar for black metal, which has long been known for treble-heavy headache-inducing sounds, it works nicely to instill a sense of unease in the listener and makes the band sound even less human. The vocals are howled in a maniacal fashion that seems to be exclusive to Russian groups for some reason and the riffs are pummeling. The drums keep things in place, but the real highlight is the demonic guitar. Each of the two original tracks on the a-side is bursting with quality riffs that will destroy any feeble listeners  Interestingly enough, following a third original track,the record's b-side features a solid Burzum cover. To be honest, I didn't listen to Burzum very much when I first got into black metal, and I haven't given more than a few listens to any of his albums, but this well-executed cover definitely shows that Burzum's influence is greater than I might have realized and that I should really give it another chance. Just listen to this flawless rendition of "Jesus' Tod" and you'll understand.

Copies of this fierce black metal assault are still available for purchase from the label and come with a variety of bonuses, as pictured above. The record comes with a poster, a patch, and stickers, which further adds to the value of an already strong offering from a band with a lengthy catalog of high quality releases.
Posted by Black Metal and Brews at 3:09 PM