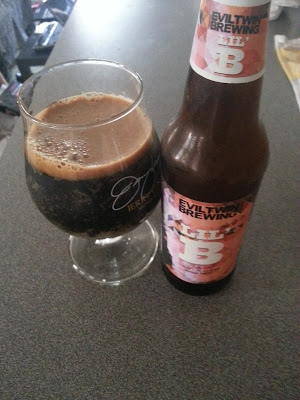 This beer serves as an appropriate way for me to get back to my old hobby of reviewing tasty new beers. It's been a while simply because I've been short on funds and beer isn't cheap. That said, Evil Twin Brewing has been on my "must try" list for quite a while now, and I'm a sucker for beers that pay tribute to musicians, even if they aren't familiar to me. I know Lil' B is a popular rapper, but that's about the beginning and the end of it. Regardless, I decided to snag this brew as a good imperial porter is always welcome in my stomach.

Lil' B (the beer) pours a nice dark brown with a thin, tan head. The nose is relatively subtle and malty, although each sip displays heavy toffee and caramel flavors, with a thinner presence than the darkness would imply. The beer's eleven and a half percent alcohol content is well masked by the sweetness and richness of the flavors, but it can obviously be felt. I'm not sure if this beer is available in a larger bottle, but I probably wouldn't want any more than this drink offers, as it would surely overwhelm both my palate and my alcohol tolerance. While I know almost nothing about the musician with whom this beer shares its name, I'm all for anybody who inspires such a delicious drink. Grab a bottle if you can find it, it's worth getting.
Posted by Black Metal and Brews at 12:29 PM