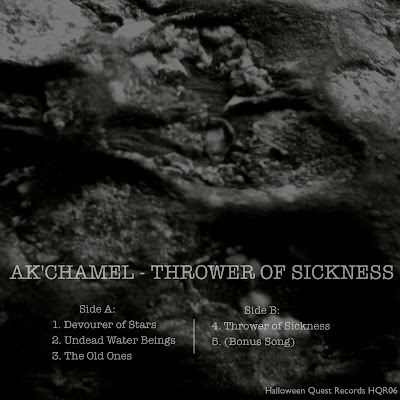 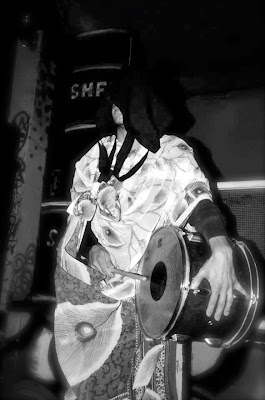 Ak'chamel- Thrower of Sickness Cassette (Self-Released/Halloween Quest Records)
Ak'chamel is an entity which spends a great amount of time in the realm of black metal, yet doesn't exist wholly within it. Instead, Ak'chamel produces blown out drones, sound collages of horror, and eerie samples that are accompanied by a muddy layer of fuzzed-into-oblivion black metal, all while remaining anonymous in outfits like the one presented above. Pairing all this with psychedelic leanings and spacey effects that may have come from a Hawkwind album makes for an experience that is enjoyable as a fan of black metal but also as a fan of bizarre ambiance. If you dig bands that toy with atmosphere and throw the rule book out the window, this album was made for you. Think of things like the murkier and more ethereal LLN groups or even the psychedelic madness of The Mausoleums. Currently only available as a free download, expect a cassette edition from Halloween Quest Records in the near future. 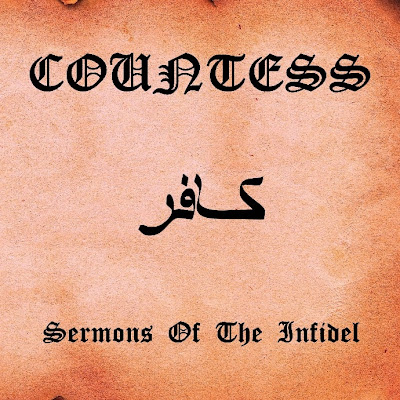 Countess- Sermons of the Infidel CD (Self-Released)
Countess stands as one of the cleaner recordings I've heard lately, following roots in a more traditional form of heavy metal while taking them down a darker path. This one-man band creates deceptively simple riffs over which stronger melodies are layered. The vocals are clearly human, snarled out with a vicious attitude, rather than the demonic shrieks of many newer bands. The evil intent drips from every line, clearly drawing inspiration from first wave black metal without simply mimicking the style of the originators. My only criticism here would be that the drumming is either programmed or done in the simplest fashion possible, but it still sets an appropriate foundation for some incredibly catchy and enjoyable metal that stands outside of time and trends. Snag this album from the artist's bandcamp page as linked above and check out his extensive back catalog while you're there.


Throne of Malediction- Out of Darkness, Comes Light (Torn Flesh Records/No Remorse Records)
Throne of Malediction grace this post with another set of sounds that rarely appears on this site, yet it's masterfully done and makes for a welcome addition. Elegant harpsichord sounds open the album with ominous spoken word, leading into an album of heavy metal which draws influences from both aggressive black metal and gloomy key-heavy doom without firmly planting itself in either. Vocals vary widely, with harsh male vocals of the black metal ilk often trading with soothing presence of gently sung female vocals that stop just short of reaching "operatic" levels. The balance of dark and light is clearly Throne of Malediction's focus, as album title and sound both demonstrate, and the balance is well kept. The album is just adventurous enough to create a unique experience, but familiar enough to keep a listener satisfied from start to finish, with a few surprise guest spots along the way. Obtain this album for free download by clicking the album's title in the header of this section and get your gloom on, or make a commitment to the darkness by purchasing from No Remorse Records.
Posted by Black Metal and Brews at 10:25 AM