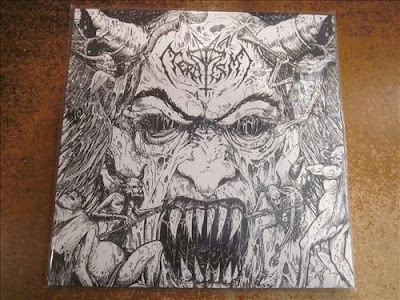 Today's review takes us to a band that made an early impression on me when I first began seriously delving into the USBM community. A friend lent me a compilation CD entitled Destroyers From The Western Skies, which included greats such as Xasthur, Krieg, and Cobalt, as well as a track from Teratism, which certainly caught my attention as one of the album's standouts. Here I sit, years later, spinning their newest release, La Bas, feeling just as impressed and thrilled as I did when I first heard them. The occult attack is as strong as ever, and these four tracks are some of the most aggressive new black metal I've heard. 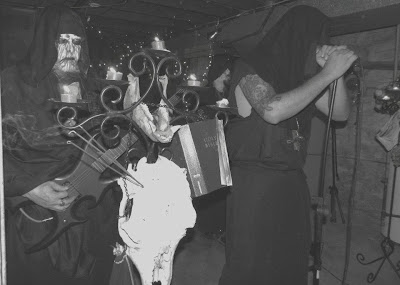 The album opens thick and ugly with "Gospel of the Heliophobe" with distorted choirs giving way to bestial madness of the most intense variety. For those who feel I often feature bands that aren't raw or evil enough, here you go. This is probably one of the filthiest black metal albums of the year, yet it doesn't sacrifice the dark majesty of the genre. Vocals are blown out and churning in all the right ways, and the guitars keep it bleak and ferocious without succumbing to simplified or dull riffs. This album's assault rarely relents, and it only seems to do so to add to the horror of the atmosphere. Many bands surround themselves with occult imagery or namedrop Satan any chance they can get, but few are actually convincing. Teratism are vicious and merciless in both music and lyrics, which is refreshing in a genre so full of showboating with minimal effort to back it up. This album closes up with a ritualistic and melancholy cover of "Come to the Sabbat" by Black Widow, a group who are new to me but are clearly worth my attention, as Teratism has dedicated this album to them. Due to its short length and consistent quality, this album certainly begs for repeated spins and has already worked its way into regular rotation in my home. 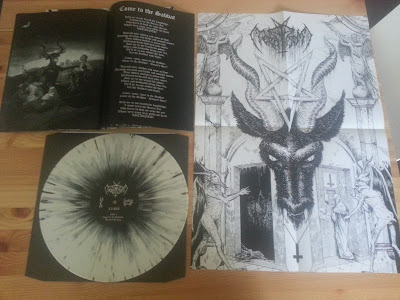 The album is currently available from Negativity Records's webstore, and comes loaded with extras to top off this demonic masterpiece. The record comes on black and white "splatter" vinyl and is accompanied by a 12-page booklet with lyrics and illustrations as well as a poster with some of the most awesome art I've seen in a while, courtesy of the legendary Mark Riddick. This is well worth the price of admission, and collectors should take note.  As I said, if you feel things have been a bit soft on here lately, don't pass on this one.
Posted by Black Metal and Brews at 8:33 AM