As part of my efforts to improve my website's professionalism, I'm trying not to pair bands together as frequently, unless I can find a legitimate reason to bunch them together. However, today's post is one of curiosity to me. Here we find two very different takes on black metal from two bands who are releasing tapes without the aid of labels. The relatively orthodox, grim sounds of Rudemas have been occupying my ears lately with similar frequency to the entirely unorthodox, highly blasphemous hybridization of black metal and metalcore that Smuteční Slavnost (whose name translates to Funeral Ceremony, according to Google) provides. With this in mind, let's examine two separate yet equally fascinating pieces of music. 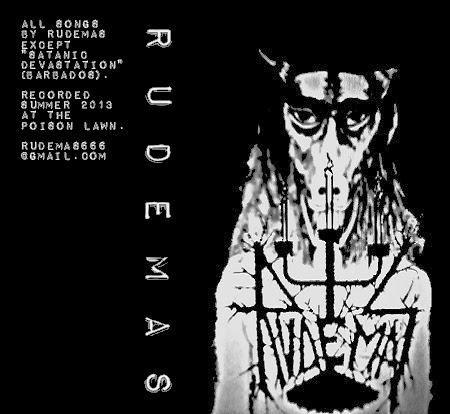 Rudemas's "Demo" is a collection of five feedback-heavy black metal assaults that carry the urgency and pace of many first-wave bands with a rawness more akin to the second wave.  While the music here isn't exactly breaking new ground, this Tennessean two-piece is serving up highly addictive and catchy black metal that delights me with its sincere simplicity and aggression. That's not to say that this is sloppily written or amateur, simply that it goes for a relentless, raw punky approach that feels truly evil, or at least menacing. The thing that sells me most on this band is just how much I can tell these guys clearly love the music they're making. Some things can't be faked, and this feels like two fans of the genre giving it their all. This demo has me eagerly waiting for more and I hope these guys can churn out some new material soon, because music this fun truly warrants at least a twenty-minute live set. For every bit of familiarity in Smuteční Slavnost's antifascist black metal assault presented on "Nářky věčného zatracení", there's an equal amount of peculiar, breakdown-friendly mosh madness that will confuse elitists and delight open-minded fans of metal's many subgenres. For me, this has a bit of personal significance. While black metal is far and away my choice of music these days, my high school years were spent listening to the Trustkill roster just as much as I was becoming excited by discovering Emperor or Ulver. The weird fusion of the two disparate sounds presented on this album brings me back to a time in my life when I didn't really understand genres as much as I simply liked my music heavy. While I certainly dug things back then that I'm not as fond of now, it's important for me to acknowledge that this album makes me nostalgic even though I didn't have anything like this in my collection back in the day. Valiant black metal riffs are paired with blasts that feel more like excerpts from Misery Index's rhythm section than typical black metal drumming. Vocals here have a feral rasp that almost verges on the throaty DSBM shriek at times, yet also surprised me on more than one occasion with guttural vocals you might expect from a slam band instead of any bastardization of black metal. This will be a hard sell for some of my readers, but folks who have enjoyed bands like Ancst or even Carnival in Coal will appreciate this fresh approach to otherwise familiar territory. Tapes are sold out, so enjoy the streaming audio for now.

Posted by Black Metal and Brews at 8:16 PM