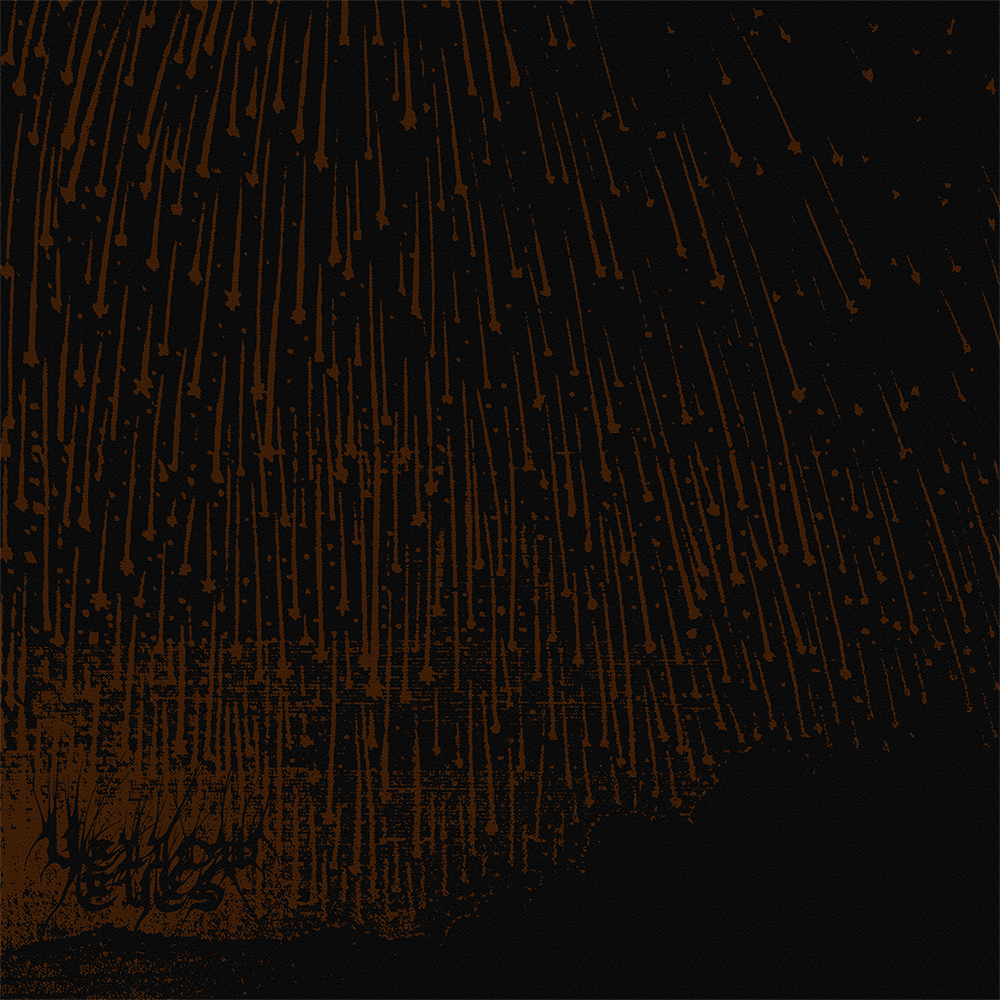 Readers who have been following for any amount of time should know I've been big on New York black metal group Yellow Eyes since the beginning of my writing career (if you could call a blog a career). In just a few short years, these guys have gone from being a band with a promising demo to being the sort of hot commodity who makes year end lists on sites with hundreds of times the visitor count of my little blog. I've even seen copies of their debut demo going for offensively high prices on discogs, which is a sign of their current popularity, although I'd love to see the band getting that kind of cash instead of folks who bought a tape and never even listened to it. In other words, I love Yellow Eyes and it's incredible to me that they've become such a buzz band. This hype would typically be hard to live up to, but this band delivers time after time. Today we're taking a look at their brand new 12" EP, The Desert Mourns.

With only one song on each side, this album plays at 45RPM, which is a rarity in my collection, but makes this a real collectible gem. These two songs see Yellow Eyes demonstrating a sound that is truly their own yet instantly welcoming even for those not previously initiated with this skilled young act. Vibrant and bright guitars that cut through the mix with a clarity uncommon in black metal will grab your attention almost immediately after following the band's trademark introductory ambiance. If the band's energy doesn't come through your sound system with the passion and fury of a live performance, then I can only assume your ears or heart aren't in the right place, because this is a gripping, if not unnecessarily brief, demonstration of Yellow Eyes' mastery of the genre and true potential. The drumming is expressive without hogging the spotlight and the vocals are almost scientifically engineered to hit the right degree of presence for this kind of music. There is a sense of confidence that this album displays that, while other releases hinted at, is finally coming to the foreground here. I think the band has always had material like this in them yet perhaps did not have the reputation or experience necessary to share it properly. This isn't really even ambitious so much as it is another step in this already challenging band's continuous path towards dominance of the metal underground. Another thing to make note of is the lyrical expansion. While Yellow Eyes' career started with rather bleak, depressing lyrics fixated on self-loathing, misery, and generally unpleasant themes, they've adapted the position of storytellers rather than miserable black metal dudes. While I'm a fan of both, the growth and maturity of the band has clearly expanded in every aspect of their complete package, which delights me. As an aside, if you're a geek like me, you'll love how intense this gets if you play it at 33RPM instead of 45. You'll have to try it for yourself when you grab a copy.

This album is available on its own in versions unique to both the US and EU, as well as in a bundle with a shirt commissioned for this particular album. I'm honestly surprised this didn't sell out in its first day or two, but that doesn't mean you should wait long if you want to have a shot at owning a copy. Also, yes, I'm still unable to embed from bandcamp for some awful reason. Here's a youtube sample of the title track. Once my official site goes up soon I'll be able to embed properly again. Thanks for the patience, dear readers.

Posted by Black Metal and Brews at 4:38 PM