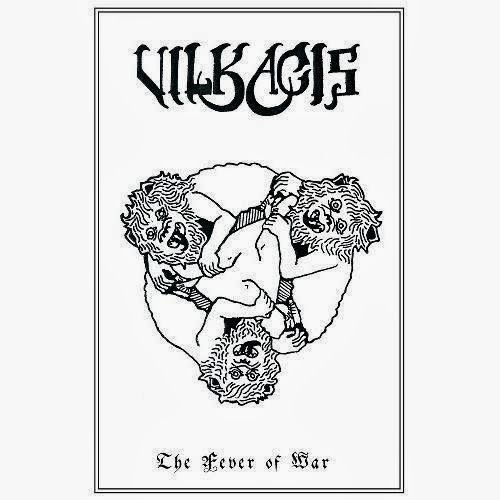 So I guess this post might make it clear that I'm doing a three part post on the Psychic Violence winter dispatch. I figured yesterday's post about Urzeit was a good start to get your attention, so here's one you can actually get your paws on (although not from the original label). Vilkacis is a solo project of M. Rekeviks of Fell Voices. Little else needs to be said in preparing you for the level of quality presented here, yet fans of the band will be pleasantly surprised to find that this is not merely a clone of Rekeviks' primary band.

The Fever of War is a beast unto itself, with blast beats and tremolo picking leading the way, but in a far less textured and dense way than Fell Voices. Instead, this brings to mind the blistering minimalist approach of classics like Darkthrone's Transilvanian Hunger with its simple yet appropriately balanced style, although this certainly has more depth than this description might imply. Imagine a violent blizzard, or perhaps even a barrage of gunfire as the visual equivalent of this album's sonic quality. It drives incessantly onward, yet never quite leads one to exhaustion or boredom despite the repetition on which this sort of music often relies. The textured, droning centerpiece of "Sentinel at the Gate" provides a slight reprieve from the madness, akin to some of the more soothing ambient passages from Blazebirth Hall artists, but without the potentially unsavory associations. The following track (which kicks off the B-side) starts things off at a far slower pace, allowing us to regain our footing before jumping back in to the furious and vibrant track, "Wind and Flame." Perhaps I'm just a sucker for this kind of rawness, but this is one of the most masterful demonstrations of this niche that I've witnessed in quite some time. Far too often, bands like this lose themselves in either self-indulgence or (even worse) doldrums of monotony. Vilkacis deftly avoids these pitfalls and has offered something timeless with this debut release.


As previously mentioned, copies are still available in the Analog Worship distro, although I can't imagine these will last long, so grab this beauty while it's still available or else try your luck on discogs, where copies currently exist but will likely vanish just as quickly.
Posted by Black Metal and Brews at 7:18 PM